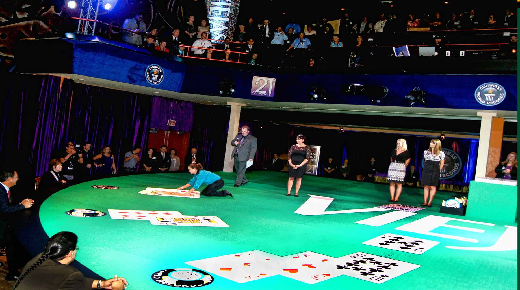 The popular San Diego gaming venue Viejas Casino, along with celebrating its twenty-first anniversary, decided they would also attempt to set a Guinness World Record for a black jack game played on the largest black jack table. The new world record was successfully set at the casino the week of September 13, 2012. The Viejas casino is a premier gaming, entertainment and dining facility in the beautiful San Diego area of southern California. Casino guests and employees had a hand in setting the new world's record for the casino.

The General Manager of Viejas Casino, Chris Kelley, was excited for everyone who participated in this feat. Six guests sat at the blackjack table and played a game at the extraordinarily large table which measured over 2,225 square feet. They used chips and cards to play the game that were ten times the size of normal chips and cards. To set this record, the dealer stood on the table for the entire record-setting blackjack game. He used a duplicate set of cards normally used by Viejas Casino. They were exactly ten times the size of the casino's normal sized cards. One of the officials from Guinness World Records in London was specifically flown in just for this special occasion. The official from Guinness was there to measure and to confirm that the Viejas casino employees and guests had set the new world's record.

Once the record was officially certified by Philip Robertson, the Guinness official, everyone there promptly erupted into applause and cheers. The casino was excited and felt that this accomplishment added to their commitment to always offer their guests a fun and exciting place to play games and to be entertained. A special offer was made soon after the Guinness record was set to those who belonged to the Viejas Casino's V-club. Players were able to play a blackjack hand at the newly crowned World's Largest Blackjack table. They were also entered into several drawings to win portions of a $21,000 prize. Over the following weekend, guests were also able to enjoy free music, entertainment and anniversary cake to help the casino to celebrate their twenty-first year. The anniversary celebration drew to a close with two very lucky guests winning 2013 Mercedes-Benz C250 Coupe vehicles. The Viejas Casino in San Diego, California is run by the Viejas band of Kumeyaay Indians.

This tribe has a long 10,000 year history marked by unique customs and traditions. In recent years, they have run successful business enterprises as well. The Viejas tribe is very committed to keeping with the traditions of their ancestors. They also willingly and generously share their success and good fortune with the southern California community.