Zynga: the New Online Casino the Industry is Talking About 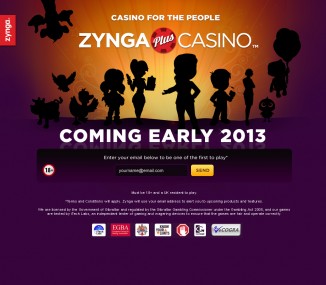 In the last few days Zynga, the social media gaming behemoth, has launched Zynga Plus Casino and Zynga Plus Poker in the UK. These represent a move away from the Facebook-based games they made their name on, such as Farmville and Chefville, although these are now available as Slot-based games on the new Casino website if so desired.

With its Facebook deal having ended in late March, Zynga are attempting to conquer the real-money gaming market. The proposition has to be seen as a gamble, since recent estimates suggest that 80% of Zynga’s revenue comes from Facebook users. The end of Zynga’s deal with Facebook does not mean they will not be incorporating Facebook functionality. It does however mean it will perhaps not enjoy as much consistent web traffic, though not paying Facebook a 30% cut of all credits any longer may help their revival. In more ways than one, this venture represents a ‘gamble’ for Zynga. To this end, last August the company announced that they had hired Maytal Ginsburg Olsha to head up their real-money gambling sector, becoming COO of New Markets. Olsha is 888’s former senior vice-president of corporate and regulated markets, and is considered one of the best in the business, clearly demonstrating just how serious Zynga are about succeeding in the very competitive gambling industry.

Currently Zynga Plus Casino and Zynga Plus Poker are only available for web and desktop download, both gates for 18+ ages, in line with the UK’s gambling restrictions. It is only a matter of time before mobile versions are released considering Zynga’s pedigree in mobile social gaming, and a spokesperson for the company has confirmed that there are plans well underway to launch ‘social versions’ of real money games for Facebook, smartphone and tablet throughout the next year. Despite there no longer being a deal between Zynga and Facebook, both are attempting to reverse their previous successes in raising money from a social game to making money from gaming and creating a social aspect as a secondary addition.

The attempts of both Zynga and Facebook (now working with 888 games) to lure social users into casino gaming has drawn much criticism already. Facebook suffered the wrath of press and people alike last year when it launched its first real money gambling game - Bingo Friendzy - last August. Many suggested that having real money games on Facebook will make problem gambling worse, and may tempt those trying not to gamble. In addition, there was a point raised primarily by Professor Mark Griffiths, Head of Gambling Studies at Nottingham Trent University, that the excessively child-friendly ‘graphics and imagery’ seem a deliberate attempt to promote gambling to children and adolescents. It remains to be seen whether Zynga will attempt a similar setup when linking with social media, but the dangers remain. If the idea of socially active real-money gambling is successful in the UK, it is almost certain to spread to other countries – especially if the US gambling laws are relaxed soon.

To prove this point, it appears users of Zynga can already deposit pounds, dollars, euros, yen and Canadian dollars – perhaps an indication of targeted countries.