Age of the Gods™

One theme that will never tire is that of gods and goddesses. This is the subject of Playtech’s Age of the Gods™ online slots game, where you’ll spin for a win alongside the likes of Zeus, Hercules, Poseidon and Athena, racing to score payouts in 4 different free games modes, scooping up Multipliers, Wilds, Free Spins and more during your quest for greatness. Where can you play this action-packed, Greek-god inspired game that boasts four mystery progressive jackpot prizes? Our top pick is Mansion Casino – not only for its incredibly generous sign-up bonus, but for its stellar selection of slots too. For now, let’s explore all that Age of the Gods™ has to offer.

There really is no faulting any of the visuals you’ll find once launching this slots game. Immaculate graphics create a surreal atmosphere on the reels, well in line with the whimsical subject matter that inspired Playtech’s Age of the Gods™ creation. The vivid but soft colour palette adds a degree of depth to your play, perfectly impersonating what the Greek gods may look like were they more fact that fiction. Be prepared to get lost in a fantasy world that you won’t soon want to leave.

Optimised for mobile, Age of the Gods™ can be played on any device you wish – including smartphone, tablet, laptop and PC. We generally advise gaming on devices with larger screens to fully appreciate the graphics, but with games like Age of the Gods™, you’ll be duly impressed no matter which gadget you launch the game on.

Following a standard 3x5-reel format with 20 fixed paylines, bet sizes on Age of the Gods™ range from 0.01 coins all the way up to 25. If you’re on max bet, you’ll be spinning at 500 coins a pop – but seeing as you could win up to 250,000 credits as a result, it seems like a small price to pay. And that’s only in the base game, never mind any of the progressive jackpot payouts you’ll also be playing for.

As the theme dictates, the symbols you’ll find in Age of the Gods™ all centre on the figures Greek mythology lovers will know and love. These include the high-paying Zeus, Hercules, Poseidon and Athena symbols, as well as the lower-paying Aphrodite, Hades and Helmet symbols. The bottom of the range is the A, K and Q symbols, and the highest paying symbols is the game’s Wild, which can award as much as 10,000x your bet amount. Age of the Gods™ is also packed with bonus features, like multiple Free Spins and Multiplier combos, all of which can be triggered with 3 or more Scatter symbols, represented by the game’s logo.

Play Age of the Gods™ Today

Our top casino pick for playing Age of the Gods™ is without a doubt Mansion Casino. As the name suggests, you’ll find all sorts of royal deals as a regular player, starting off with an extremely high welcome bonus of up to C$5,000. Sign up today and join the journey! 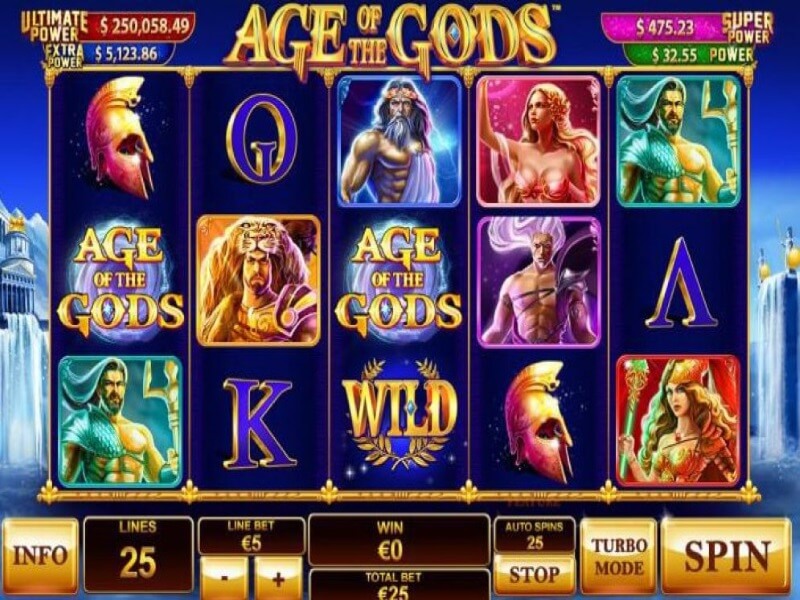