With a max win exposure of 500 000, incredibly slick graphics and an edgy detective theme, Play’n GO’s Agent Destiny packs a powerful punch when it comes to first impressions. We’ve seen a strong number of impressive online slots come out of Play’n GO’s studio of late, and Agent Destiny has all the makings of becoming a player favourite. That said, it does stick to conventional mechanics, offering up a rather predictable 5 reels and 20 paylines. Nevertheless, if familiarity enhances your ability to enjoy a game even more, then don’t let it stand in the way of what could possibly be your new favourite. Let’s take a closer look at Agent Destiny’s symbols and features, before we recommend a Play’n GO casino you can enjoy it at – on top of plenty other player benefits.

Symbols and features to look out for

Following its noir-inspired roots, Agent Destiny is full of character symbols, representing people one would typically find in a detective film. You have your goodies and your baddies, with a sound mix of regular playing card symbols in between, including stylised versions of the A, K, Q and J icons. Landing 3 or more of these on an active payline will trigger a payout, while each character symbol, along with the Safe Wild, also has the ability to appear as a Mega symbol at any time.

If you want to trigger this online slot’s Free Spins round, you’ll need 3 of the Wild Scatter to appear on reels 1, 3 and 5. Another way to earn 1 Free Spin is via the Linked Reels feature. Linked Reels is automatically and permanently enabled during Agent Destiny’s Free Spins feature, but can also randomly trigger on any spin. Linked Reels moves the symbol appearing in the rightmost reel over to the leftmost one, populating identical symbols in the rightmost one to boost payout potential – certainly an exciting element that adds an even bigger sense of unpredictability to this already charming creation. Thanks to these features, Agent Destiny is able to produce payouts of up to 5000x your bet, making it a popular option for all.

Agent Destiny can be enjoyed at any casino featuring Play’n GO online or mobile slots. If you’re not a registered casino member yet, or aren’t signed up with a gambling hub that features Play’n GO software, you can simply follow your nose to find a compatible destination at which to play Agent Destiny – or you could give Play Million a shot. Why do we recommend them? For a number of reasons. Not only do they stock quality online slots like Agent Destiny, but are also adding new games to their already exciting line-up as they’re released. Added to that, Play Million offers new players an exclusive deposit bonus, followed by plenty of promotions. Plus, you’ll get to bank safely, easily and conveniently using one or more of the payment solutions featured on their site. 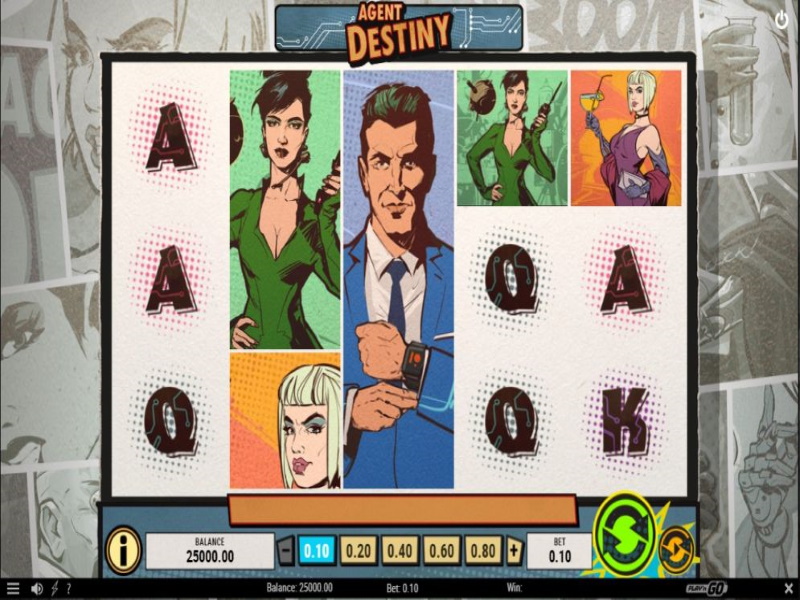