One of the most famous tales from 1001 Arabian Nights is brought to life in fun-filled online slot powered by Realtime Gaming. Aladdin’s Wishes offers a new perspective on beloved characters, as well as the chance to find out if the genie will make your wishes come true.

Special symbols pack a punch of excitement into the base game, while the bonus games award not only Free Spins, but the chance to get your hands on magic lamps as well. There is even a progressive jackpot to be won.

Like most of the leading provider’s video slots, Aladdin’s Wishes is played on 5 reels with a starry desert sky and palace turrets as a backdrop. There are 20 paylines, but they are adjustable, so if you want to play with fewer lines active, you can use the Lines buttons on the interface to adjust the number to your preference.

The themed symbols include characters and objects from the story. You can find the friendly spirit being, as well as the lamp in which he lives. Aladdin and his adored princess are also there, as is a pet monkey, a grand palace, a flying carpet, a scimitar, a bag of gold coins, a golden bracelet, a large vase, and a bowl of fruit. The princess is the highest paying of the regular symbols.

The feisty hero of the story is the Aladdin’s Wishes Wild. Although he appears on reels 2, 3, and 4 only, he more than makes up for it by substituting himself for other symbols in this online slot if he can help them create a payout.

If he does help land a win, the amount paid out will be doubled, because the Wild also acts as a 2x multiplier. There is only 1 symbol for which the Wild cannot substitute, and that is the Scatter.

The magic lamp Scatter fulfils 2 different functions in Aladdin’s Wishes slots. The first is to pay a coin prize of 2x your bet when 2 or more land anywhere in view.

However, if you really want to release its power, you will need to land 3, 4, or 5 in any position on the reels. Doing so triggers the bonus game, and that is when things start getting really exciting.

If you land enough Scatters to activate the bonus feature, you will be transported from the main screen to another setting in which several lamps are waiting for you. The number of symbols that triggered the round determines how many of the lamps you can select.

Each one conceals a prize. Some can award you with as many as 25 Free Spins with a 2x multiplier for any wins you land. Other lamps, however, award multipliers of various sizes. If you made the right choice, you could see your online slots winnings multiplied by as much as 100x. What’s more, if you land more Scatters during the Free Spins, you can re-trigger the feature, which means more chances to spin for free, and to win more generous multipliers.

One of the most exciting elements of Aladdin’s Wishes is its progressive jackpot. When seeded, it is worth 1000.00. However, it does not stay that size for long.

Every CA$ bet placed will feed the total prize pool amount, so it gets bigger and bigger until it is awarded randomly, at any point during the base game.

If you are keen to join Aladdin for an action-packed slots adventure, one of the best places to play is at Yako Casino. The site is licensed and regulated, is powered by the best software, and offers Canadian players bonuses, loyalty rewards, and more. 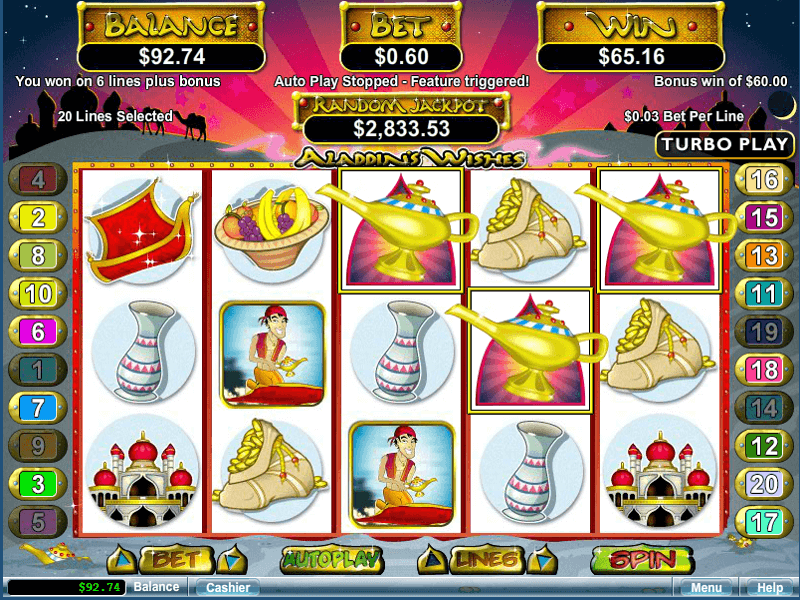