There was a time when Zeus ruled the roost, sitting high atop Mount Olympus and hurling down bolts of lightning at unlucky mortals. Thankfully, his days were numbered, and the angry God is now mostly found only in books about Greek mythology. Though, that doesn’t mean that Zeus isn’t still alive and well in an online slot!

Ancient Fortunes: Zeus is a classic in the world of slots, developed by industry legends Microgaming. The game features gorgeous graphics, interesting special features, and Zeus himself, who happens to be sporting a pretty impressive six pack.

At its core, the game has 5 reels, 3 rows, 10 paylines and an RTP of 96.02%. Though, these reels won’t be doing any spinning, as in standard online slots. Instead, they’ll be falling from above. The Rolling Reels system is in use in this game, which means that instead of spinning, symbols fall onto the reels from up top, as if compelled by gravity. If they match, they vanish, allowing new symbols to fall in and occupy the empty space. If you haven’t already figured it out, this means that multiple wins are possible during a single round.

It is obvious that Zeus is the focus of this online slots game, and players will recognise him by his great big magnificent beard, and glowing eyes. He is joined by Hermes, Ares, Poseidon and Dionysus. Each of the Gods appear as is if carved out of stone, creating an excellent visual effect that fits in perfectly with the theme. Though, if you think that is impressive, wait until you see Zeus bursting onto the reels for the special feature.

As far as slots go, Rolling Reels is a pretty neat idea. It keeps the action fun, unpredictable, and potentially very lucrative. After all, multiple wins are big bang for your buck. But Ancient Fortunes: Zeus takes the idea of Rolling Reels and pushes it into 5th gear. For each consecutive win that occurs in a round, a multiplier is added. Above the reels is an indicator that dictates the currently active multiplier, which automatically ticks up as wins are racked up. Multipliers go from 1x, up to 7x for the 3rd consecutive win.

All this in itself already makes this one of the Rolling Reels slots that deserves your attention. But wait, there’s more. The Free Falls feature takes it to the next level. The lightning bolt symbol is the Scatter and landing it 3 times on the reels at once is sure to cook up a serious storm.

When this happens, Zeus returns, and he has 10 Free Falls to award. Though the eagle-eyed will notice something different. The multiplier gauge has now shifted, becoming a much more lucrative version of itself. 7x, 11x, and 21x multipliers are now on the cards, which means that serious payouts are potentially up for grabs.

In the world of classic online slots, Ancient Fortunes: Zeus certainly stands apart from the rest. The unique Greek Aesthetic is impressive to behold, and the simple, yet engaging mechanics are refreshing. 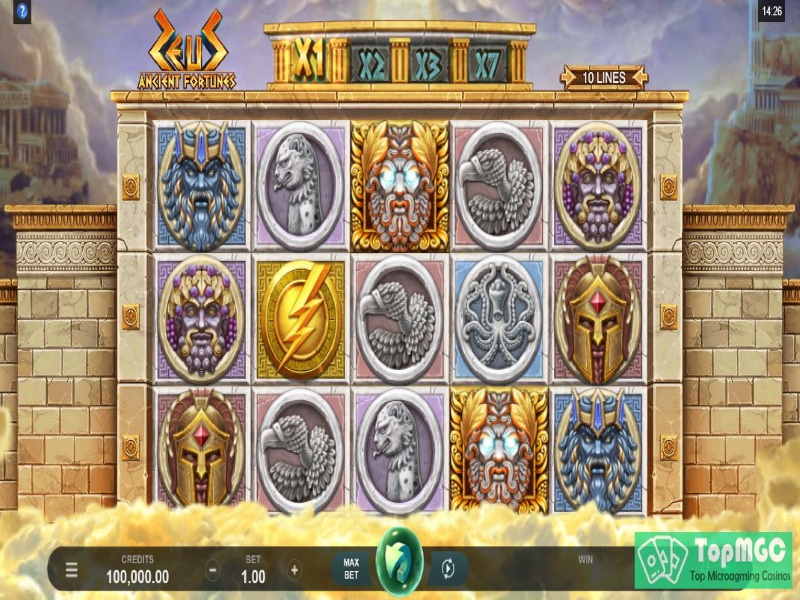