The Internet is packed with online slots about ancient Greece. So much so that when another one is released, it becomes hard to hold back the eye roll that will inevitably follow. But, sometimes, just sometimes, an online slots creation comes around that shuts up even the biggest critics of this particular theme. One such slot, is the new design by Leander Games. Packed with 5 reels and 20 paylines, the latest Greek-themed creation, Apollo God of the Sun, delivers in more than one way. Bet sizes are extremely flexible, and start from a minimum of 0.20 credits per spin, to a maximum of 100, making the slot a good choice for both novice and experienced gamers. Let’s take a closer look at what awaits in terms of bonus features.

Rewards That Make the Gods Smile

The slot is based on Ancient Greece, more specifically, Apollo the god of the Sun, which is also why it provides a suitable title for this slots creation. You’ll therefore find symbols that tie into the nature of the game. These include traditional low value playing cards such as A, J, Q, K, 9 and 10. The highest paying symbols include a clay jug, warrior facemask, pillar and a suit of armour. The suit of armour is the most rewarding, paying a total of 500 coins. The sun represents the Wild, and replaces all symbols excluding the Scatter to help form winning combinations.

An animated version of Apollo, the game’s main character watches over the reels. He can appear while a spin is in progress and can call upon the sun to add stacked Wilds to either one or more reels. This feature is called the Almighty Sun bonus. When three of the mule bonus symbols are activated on the second, third and fourth reels, the Muse of Music feature is activated. This is a pick me round, and players will be able to choose from a selection of coins. They’ll then need to click on one of these coins in order to reveal an instrument. Matching identical instruments will result in lucrative cash prizes where there is a potential for you to win up to 45x your stake.

An action-packed Greek-themed title is not complete without a Free Spins feature. This title’s Free Spins round is triggered when you land three Free Spins icons on the first, third, and fifth reels during the same spin. Do this successfully and you’ll activate the Eternal Flame bonus round where you’ll receive seven Free Spins as a reward. The Almighty Sun bonus will also be in play here, and stacked Wilds will be added to each Free Spin, which guarantees a payout on each spin. Then, as if that wasn’t enough, Apollo God of the Sun also comes with a progressive jackpot feature. This means that while you might be casually spinning the reels of the game, a life-changing payout could be coming your way at any given time. Curious? Find out where to play it below.

Play Apollo, God of the Sun at Playzee Casino

Channel the power of Apollo by playing Apollo, God of the Sun at Playzee Casino. As one of the most trusted online establishments around, Playzee Casino not only provides players with a competitive selection of slots, like Apollo, God of the Sun, but also provides new real money account holders with a lucrative welcome offer. Sound like the perfect gaming destination for you? Then pay them a virtual visit today, and say hello to an entertainment experience unlike anything you have ever encountered before!M 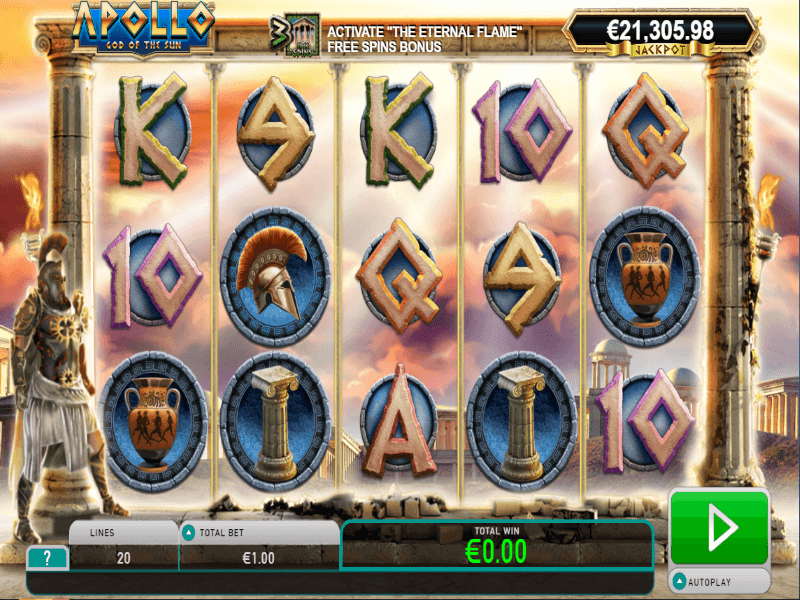