The Batman Video Slots game, like The Flash, was initially produced by Cryptologic, then sold to NextGen Gaming and finally acquired by NYX Gaming as part of its purchasing of NextGen. All that’s happened is the game has passed from one good hand to the next, and along the way has gone from an online video slots game to a mobile slots game, ready for play on smartphones and tablets. In other words, the Batman is everywhere!  In creating this version of Batman, the creators have stuck closely to the original DC Comics.

There’s no indication of any sort of the films released by Warner Brothers. There have been other Batman video slot games released, namely the Dark Knight™ by Microgaming.  Like the large shadow that the Batman casts on all would-be criminals, this game casts quite a big shadow in terms of win enhancers and bonus games and it’s all ready and waiting at Casino Room

The Batman is at Casino Room

Fight crime, take out the bad guys and get the wins in Batman Online Video Slots, available at Casino Room along with hundreds of other exciting titles sure to make you want to make this online casino your gaming destination of choice. Casino Room's range of gaming content suppliers can be compared the caped crusader’s utility belt – it’s got something for all possible situations! Casino Room is partnered with NYX Gaming, ELK Studios, Betsoft, NetEnt, Thunderkick and other notable suppliers to give players a well-rounded and diverse gaming experience.

Games aside, Casino Room offers new players not one but two deposit bonus offers, each of monumental proportions. Your first deposit bonus is a 400% match up to C$800 and it’s followed by a 150% match up to C$1 000. That’s a total of C$1 800 in potential bonus cash. As we always tell our players, make sure you understand the nature of the offer, and always look at gaming as a form of entertainment and not one of making money.

Get Struck by the Batman

The Batman can strike luck into the hearts of players and it’s why this video slots game is quite a popular title. Batman Video Slots is available across all platforms, meaning that you can enjoy it as a mobile casino game too. In terms of size, a very respectable homage has been paid to Gotham’s protector. Like the large shadow of the bat looming over wrong doers, this game casts a long shadow in terms of scope and winning potential. Once you start playing you’ll be faced with 5 reels, 4 rows and 50 paylines! Image-wise you’ve got Batman, Commissioner Gordon, the Batmobile, the Batcycle, the Batorang, the Bat Grappling Hook and The Jokers key items – the joker card and the phony gun that goes boom!

Batman Video Slots offers up some really exciting ways by which to have you winning big. First up is the dark knight himself, Batman, who serves as the Wild of the game. If he lands on reels 2, 3 or 4 he’ll become stacked, stretch across the entire reel and create the strongest potential for a big win. Commissioner Gordon isn’t on the reels just for show, he’s there to give you this game’s famous Respin feature, but he’ll need the help of the bat signal. This means that if the bat signal and Gordon land on the first and last reels at the same time, you will be the recipient of 3 free spins. Added to this cool feature is the fact that while your free spins progress, any one of reels 2, 3 or 4 could become a stacked Wild thanks to the Batman.

The Bonus Bet is a nifty little addition that costs you a little more but can give you additional wild symbol on reel 2, 3 and 4 and you’ll need it if you want to get into the game’s famous Descent Into Madness bonus feature. Entry into this feature is provided through the Bat logo Scatter when 3 appear, and once this happens it’s up to you and Batman to take down the inmates of Arkham Asylum. Make it far enough in this feature and you’ll face off against the Joker after which up to 100x your bet could be yours! 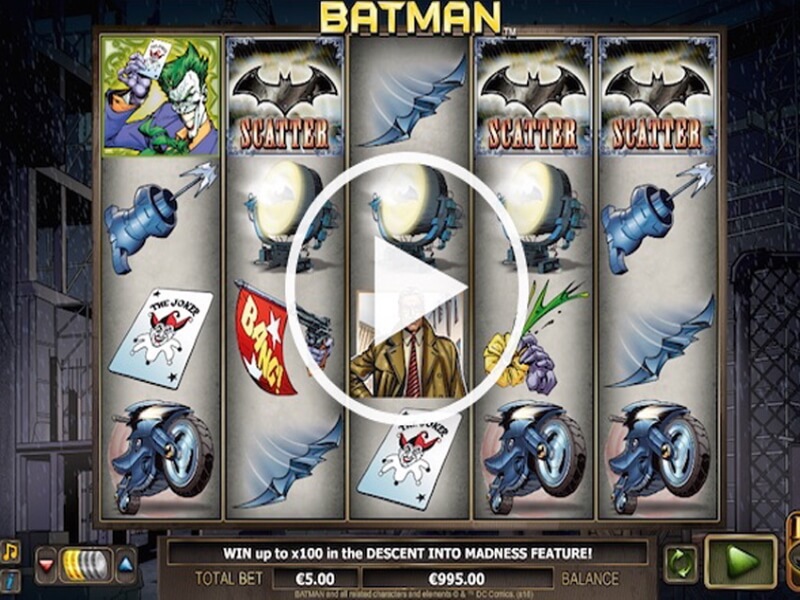