A bright and bold creation from acclaimed game developer, Play’n GO, Blinged is an online slot for players in Canada who appreciate the world of hip-hop style, or just love a solidly entertaining game. Played across 5 reels and 10 fixed paylines, Blinged comes loaded with attitude and glamour, thanks to sparkling graphics, pitch-perfect sound quality, and hit features like Win Spins, Respins, Multipliers and Wilds. What’s more, fans of mobile games will be happy to know that Blinged is optimised for play on all compatible tablet and smartphone devices, which means it’s just as blingy on smaller screens as it on larger PC screens. Put on some shades, it’s time for a closer look at Blinged and all it has to offer online slots players in Canada.

Themed around the hip-hop scene, particularly women of hip hop, Blinged is typical of Play’n GO’s slots in that it looks and sounds great. Drawing inspiration from a world that views gold, diamonds, wads of cash, glam street fashion, limos and more as the insignias of success, Blinged is certainly a sight to behold. Once the game is loaded, players will feel like they’re driving down the streets of New York, with soaring buildings on either side and plenty of bright lights to light up the 3 rows and 5 reels. The low-value symbols include the classic card icons – A, K, Q, J and 10 – all rendered as if they’re encrusted with diamonds. The high-value symbols include the wads of cash, gold rings, gold shoes, an all-girl group, and a female rapper wearing a flashy jacket and cap. The female rapper also acts as the Wild symbol, which means she can replace other symbols to create winning formations. The only symbol she cannot replace is, of course, the Scatter, which is signified by a massive diamond. The Scatter is integral to activating the featured bonus round – more on that below.

By landing 3 or more Scatter symbols on the 1st, 3rd and 5th reels, the Win Spins feature is activated, which essentially guarantees a win. The feature gives players up to 5 Win Spins. Each Win Spin can grant players a coveted Respin, along with an increasing Multiplier, to ensure that win. In the case of a player only landing 2 Scatters, 1 Win Spin is awarded. As with the 5 Win Spins, if this Win Spin does not pay out, a Respin is triggered along with a Multiplier. What’s more, Respins keep occurring until a win is achieved. For each Respin, the Multiplier is enhanced by 1x. In both renditions of the Win Spins feature, if a player lands a Scatter symbol during play, an additional Win Spin will be awarded.  That means players can score up to 20 Win Spins.

Blinged is a thoroughly captivating online slots game for players in Canada that combines flashy visuals with fun features. It’s available to play at casinos featuring titles by plain GO. Our recommendation would be to give this game a shot at the aptly named VegasBaby Casino. Here, players will find loads of great games, as well as trustworthy banking mechanisms, first-rate support and more. 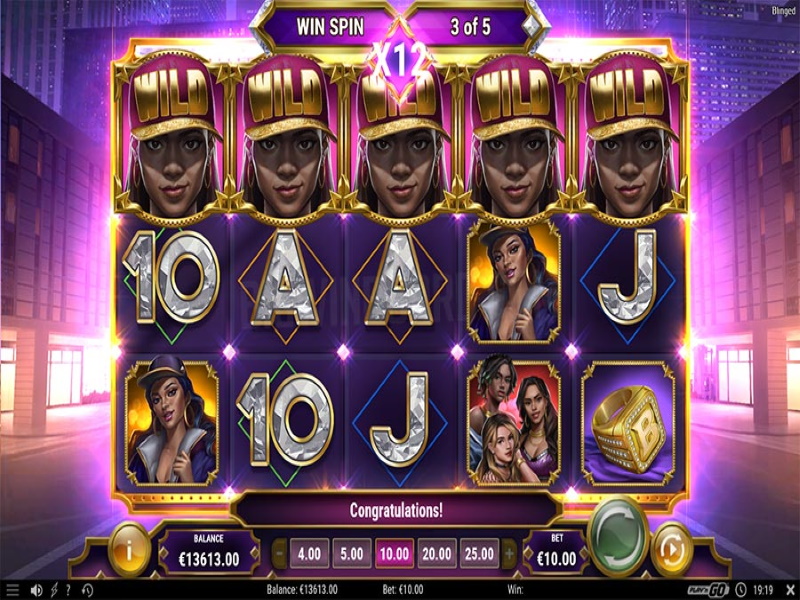