Mining definitely isn’t one of the regular themes amongst online slots games, but that hasn’t stopped NetEnt from giving it a whirl for its impressive creation, Boom Brothers. That said, they’ve done such a good job, we wouldn’t be surprised if more and more software providers started adapting this theme for their games. Taking you deeper underground, Boom Brothers presents you with a wide variety of mining tools, cogs and gears, while the sound effects even include the drip-drip of cavernous rivulets. A highly entertaining and potentially rewarding online slots game, Boom Brothers comes with a fun Rail Track bonus features, as well as Free Spins, Re-spins and more. Let’s take a closer look.

Powered by NetEnt, one of the most innovative software providers around, Boom Brothers is a fine example of their attention to detail and character when it comes to the graphics and audio accompaniment. In keeping with the underground railway and mining theme, the symbols all look as though they are suspended from chains – even though these still work as reels, they look sufficiently different from the norm to draw one’s attention. The Wild symbol is represented by a black, circular-shaped bomb – which has the word WILD on it, just in case you’re not sure. It has the power of substitution, which means it can replace any other symbol to help you complete a winning combo of symbols. Land five Wilds and you can score up to 7 500 coins. There are only two symbols that the Wild cannot replace – these include the Bonus and Free Spins Scatter symbols.

If you land three or more of the Free Spins Scatter symbols, then the Free Spins feature will get triggered. What’s more, each win comes with a Multiplier of 3x. The number of spins you receive will depend on the number of Scatters you landed to trigger the feature – you can score up to 50 spins in the process. Worth noting is that, if a Free Spins Scatter symbol appears during the Free Spins feature, you will score an additional spin. Another special feature is the Second Chances round – a miner can appear at random on the reels after a non-winning spin and award you a second chance to spin, giving you the possibility of winning the second time around. Last, but certainly not least, there is the Rail Track feature – to trigger this you must land three rail track symbols. What happens next is that the symbols line up to form a rail track and the last two reels are spun again. Your mission here is to finish the rail track so that the miners, who happen to be dwarves, can cross over to the next feature – the Bonus round. During the Bonus round, you’ll notice that there are three dwarves, each on another level and driving a mining cart. They’re on a race to see who can blast through the rock face first – you role is to click on one of the carts and reveal gold, diamonds, rubies or Multipliers.

Boom Brothers is loads of fun and is available to play at Betsson Casino, one of the top online casinos around. Have fun! 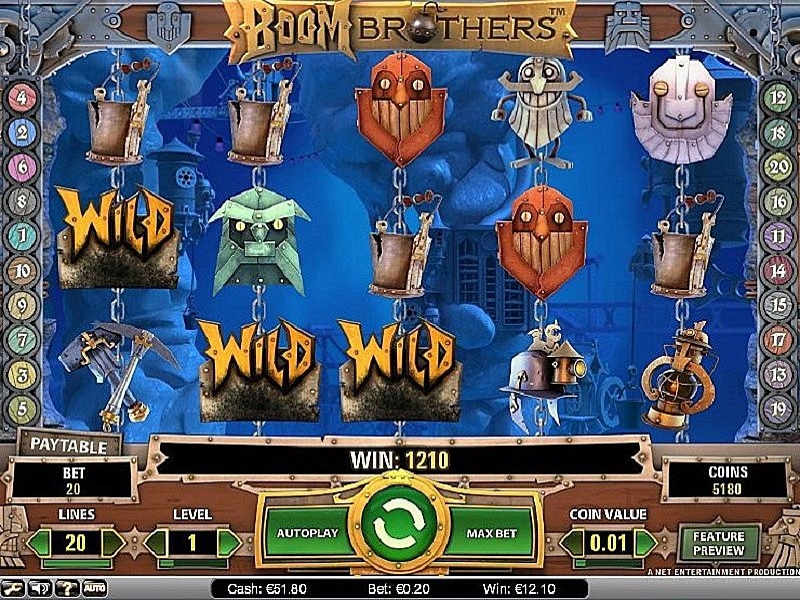