Before I proceed to tell you all about Crazy Chameleons Online Video Slots, I feel it important to tell you when this game was released as this will give you context immediately. Drum roll…this online video slots game was released in 2005, a pretty long time ago in human yeas and a very long time ago in online casino years. Technology’s speed has become so ferocious in the past 20 years that it only takes months and maybe a year or two max to deem something outdated.

I’ll admit that casino game do have one advantage – they’re templates remain the same. At the end of the day, a casino game is a casino game. Blackjack, roulette, video poker and video slots – they all operate off a specific blue print that insists upon foundational rules; for this reason they will always remain true to certain qualities. So, even though a game like Crazy Chameleons is practically a dinosaur in today’s gaming environment, it’s a dinosaur that can still be enjoyed for sheer winning pleasure.

So before we get to the meat of Crazy Chameleons, I thought it would be important to let all you Canadian online casino players, mobile casino players included, know where you could play this joyful relic of a slots game. JackpotCity Casino is the place that houses this game along with hundreds of others. Last I checked, JackpotCity had something like 600 casino games in total. It’s a staggering number.

Most of today’s operators have had to partner with numerous software providers to offer the same volume that an industry veteran like JackpotCity can. Not JPC though, this place partnered with Microgaming during its formative years and by extension, Microgaming’s formative years. As a result it’s been privy to the entire collection of games that Microgaming have produced.

One could argue that JackpotCity only offers games made by Microgaming and might thus lack a certain degree of diversity but then one would be failing to see that Microgaming makes the best games in the world and if you’ve got the best, then why look elsewhere? It’s always worth mentioning that opting to play at Microgaming will get you a cool bonus to the value of C$1 600.

Crazy Chameleons Online Video Slots is not going to garner awards in the creative department; this game pales by comparison to heavy hitters like Game of Thrones or Avalon II: The Quest for the Holy Grail. However, this is still a game of chance that can unveil a jackpot reward to value of 5 000x your line bet.

You determine your coin value, so imagine you’re betting high and you score this big win. This fact alone justifies why you should be playing Crazy Chameleons. Not bad for a game that runs on the bare video slot minimum – 5 reels, 3 rows and 5 paylines. It’s still a Microgaming title despite its age so you can still expect a certain level of quality. Funky colours adorn the reels and the beach theme is a timeless one. If you want simple fun, this is it. 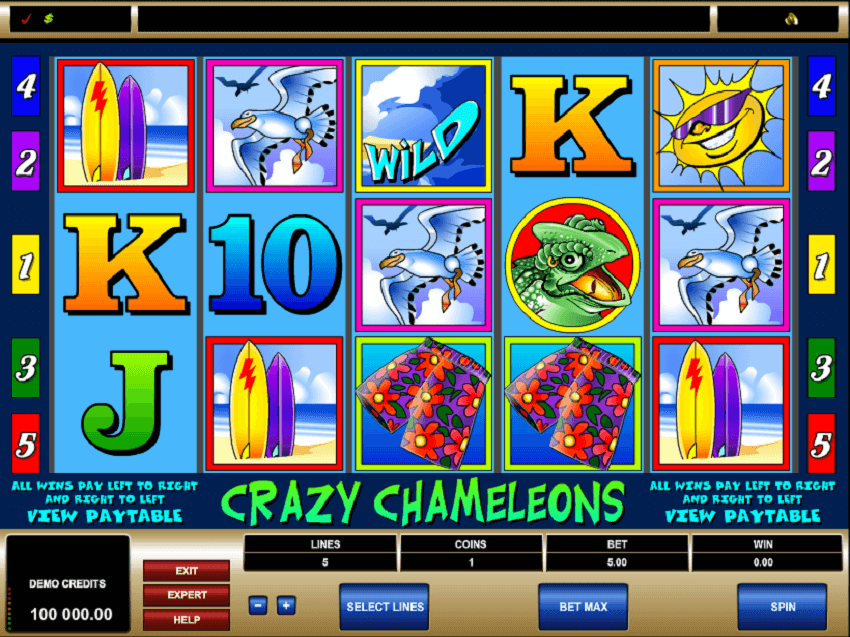