A powerful NetEnt creation, Dark King, Forbidden Riches™ is a brilliantly designed online slot for players in Canada. It features an evil monarch, stunning graphics, crisp-clear sound effects and fantastic features like Wild Multipliers, Sticky Wilds, Free Spins and Extra Free Spins. What’s more, revered software provider, NetEnt, has optimised it for all devices – so it looks and sounds great whether it’s being played on smartphone, tablet, laptop or PC. Played across 5 reels, 3 rows and 20 fixed paylines, we found Dark King, Forbidden Riches™ to be a sinister delight. Let’s take a closer look.

NetEnt is a game developer renowned for delivering quality games. Dark King, Forbidden Riches™ is no exception. As the title suggests, the design has a dark and foreboding look and feel, complimented by a sweeping orchestral soundtrack. The reels are flanked by skulls and a knight in armour. As for the symbols, these include medieval-styled playing card suits like A, K, Q, J and 10, making up the low values, with five skeleton warriors making up the higher values. The featureless Dark King is the most valuable symbol, able to pay out twenty-five times the player’s stake if five of a kind appear on a payline. The Wild symbol is represented by a gleaming blue orb – it can substitute for other symbols, except the Scatter, to create winning combinations. A bright red gemstone signifies the Scatter.

The Wild plays a central role in the game. If more than one appears, a Multiplier will come into play. For example, two Wilds landing activates a Multiplier of 2x, while three, four or five Wilds landing activates Multipliers of 3x, 4x and 5x respectively. The Scatter is also integral to the action – land three or more of this gemstone symbol on a single spin and the Free Spins feature will activate – with ten, twelve or fifteen free spins waiting to be awarded. During the feature, players will notice that the second, third and fourth reels have been highlighted to resemble a cross. This is known as the Hotspot Zone – if a Wild appears somewhere in the zone, it will become a Sticky Wild, remaining that way for the duration of the Free Spins feature. What’s more, each Sticky Wild also adds one more Free Spin to the mix. Plus, remember there are Wild Multipliers active too, so there is plenty of scope for intriguing winning possibilities.

Powered by acclaimed developer, Dark King, Forbidden Riches™ is a highly appealing online slot for players in Canada – especially those who like their games with a touch of dark fantasy and menace to them. Players will find the game at online casinos that feature titles by NetEnt. Our recommendation would be to give it a go at LeoVegas – renowned for its sensational selection of games, trustworthy banking mechanisms, world-class customer support, exciting promos and more. If you dare, LeoVegas is an ideal destination to appreciate the superbly designed world of Dark King, Forbidden Riches™. Enjoy! 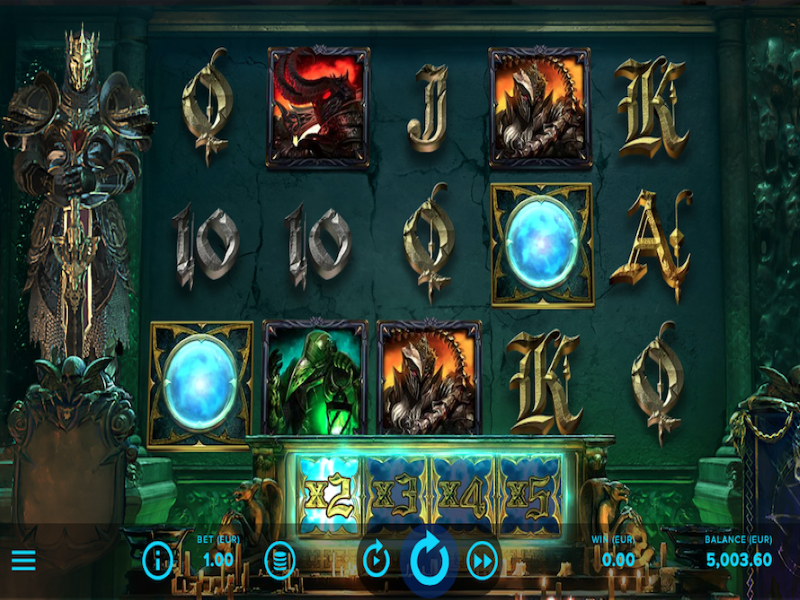