Asian-themed online slots are popular with players in Canada and globally, as these mine a wealth of history, folktales, and more. East Sea Dragon King is a NetEnt contribution to the genre that’s set under the East Sea while focusing on the character of the Dragon King. Players already familiar with NetEnt’s games, will know that this acclaimed software provider is well-regarded for its attention to fine graphics, crystal-clear sound effects, and inventive features. East Sea Dragon King is no exception – it’s a visually appealing and intriguing creation offering Re-spins, Expanding Wilds, and Cluster Pays. Furthermore, it can be played on both desktop and mobile, at all online casinos featuring NetEnt titles, such as Casino Joy. Let’s dive in for a closer look at what this online slot has to offer players in Canada.

East Sea Dragon King is a Cluster Pays slot, which means all wins are formed when a player lands 5 or more symbols in adjacent positions that match one another. This means anything from 5 up to 15 symbols are required to form a Cluster – the bigger the cluster, the bigger the payout will be. Players will be allowed to change the betting options, as in number of coins and denominations, with the total betting range being between 0.10 and 200.

The game is set in an underwater world with symbols floating on the reels. The symbols include gold, silver and bronze coins, as well as sea scrolls, jade dragons, gold ingots, and pearls. The dragon is the most valuable symbol – land 5 and the player will get rewarded 1000 times their stake. As for the Wild symbol, it is represented by the Dragon King himself and has substitution powers – this means he can take the place of any other symbol to help complete winning combinations.

If a player lands 1 or more of the Wild, it will activate the Expanding Wilds feature, in which case the Wild symbol will expand to cover an entire reel, giving the player a Wild Reel that is locked in place. Thereafter, the player will be rewarded with a complimentary Re-spin – in other words, the Wild Reel stays in place while the other reels spin. If more Wild symbols land, more Re-spins will be awarded – this will continue until no more Wilds appear. If the player fills the reels with Wild symbols, they will be awarded with a further 1000 times their stake.

East Sea Dragon King is visually simple, but attractive, with the Dragon King himself being the only character symbol in the mix. Plus, the game offers Cluster Pays, Expanding Wilds, Wild Reels and Re-spins, to add to the fun. Online slots players in Canada will find the game at all top-rated online and mobile casinos boasting NetEnt titles. Our recommendation would be to give East Sea Dragon King a chance at Casino Joy – with its more than 1000 quality games, plus excellent customer support, trustworthy banking options and more, it really is a joy to play here. Ready to dive and play? 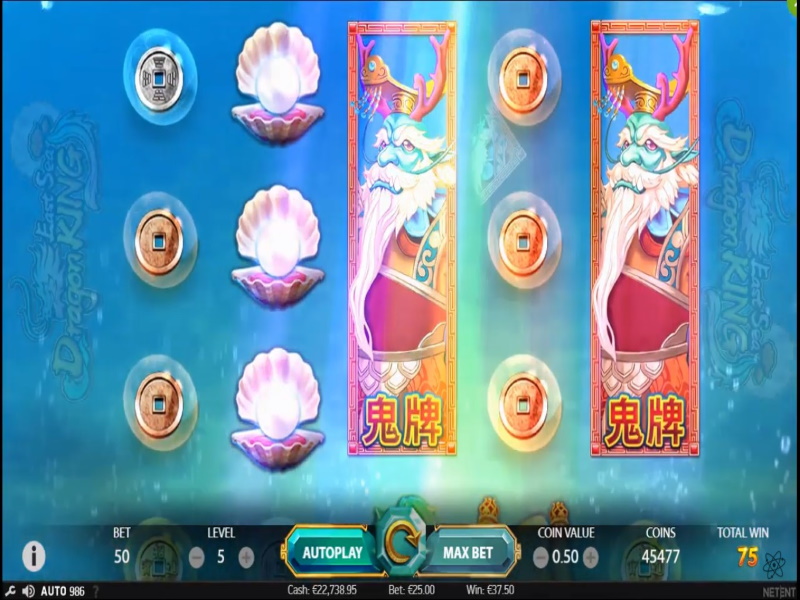