This group of super heroes has now left the building, and in their place are a whole new crew of famous comic book faces. The Marvel Slots Series has been discontinued, but you can still enjoy a super hero, comic themed gaming experience online. There are a great number of state of the art DC Comic slots waiting for you, with titles like Green Lantern, The Flash Velocity, Batman, Superman II and Justice League all offering something special. Give these games a try at a Canadian casino and discover top-notch slots action at its premium!

The Fantastic Four have arrived at Omni Casino creating a new level of excitement. This 25 pay-line slot game delivers continuous animation action. Experience up to 15 free game spins, wild-card symbols, and substitute features throughout the game as the characters come to life before your eyes during each feature. Mr Fantastic will test the limits of flexibility, the Human Torch will burst into flames, and Dr. Doom will end the game with his appearance. But wait, let’s not forget The Thing and the hammering it will inflict on the reels – each hit will increase your chances of winning on a particular spin and a multiplier of up to ten times can be awarded.

Another fabulous release from Playtech, Fantastic Four is a Marvel themed slots game that brings everyone’s favourite super heroes to life on the reels. The story of the Fantastic Four centres on 4 scientists who were accidentally exposed to gamma rays during a space mission. This exposure led them to attaining special powers and you’ll get to experience them all when you spin the reels of this compelling slots machine.

The lower value symbols in Fantastic Four are the standard playing card icons, whilst the higher value icons are the superheroes themselves. In order of most valuable to least, they are Thing, Human Torch, Invisible Woman and Mr. Fantastic. There’s also a Scatter and Wild and these are the Earth and Fantastic Four logo respectively.

The Wild can stand in for all other symbols barring the Scatter to complete a winning combination and it also makes its appearance in different ways in the bonus feature. The bonus feature is triggered by landing 3 or more of the Scatter symbols anywhere on the reels simultaneously. When this happens you’ll be rewarded instantly with 12 re-spins. During these re-spins one of the Fantastic Four will appear on the 3rd reel and when one of these characters covers the whole reel you’ll be rewarded with additional spins and one of the following:

This feature adds to the slots excitement and can be triggered repeatedly for larger wins!

The Fantastic Four is one of the online slots games connected to the Marvel Progressive jackpot and there are a total of 4 different prizes that could be won completely at random. Just by having fun and playing this top notch slot you could be eligible for the Power Jackpot, Superpower Jackpot, Extra Power and Ultimate Power jackpots which could payout at any time!

Wager between 1 cent all the way up to CA$125 and if you line up any of the five character symbols you could win 5,000 times your line bet! Furthermore, choose from five different character bonus features when you line up three or more Fantastic Four logo symbols.

Prize values increase between double or triple the amount wagered so it’s time to decide which super hero character you are going to play and sign up to Omni Casino – the best place to win online. 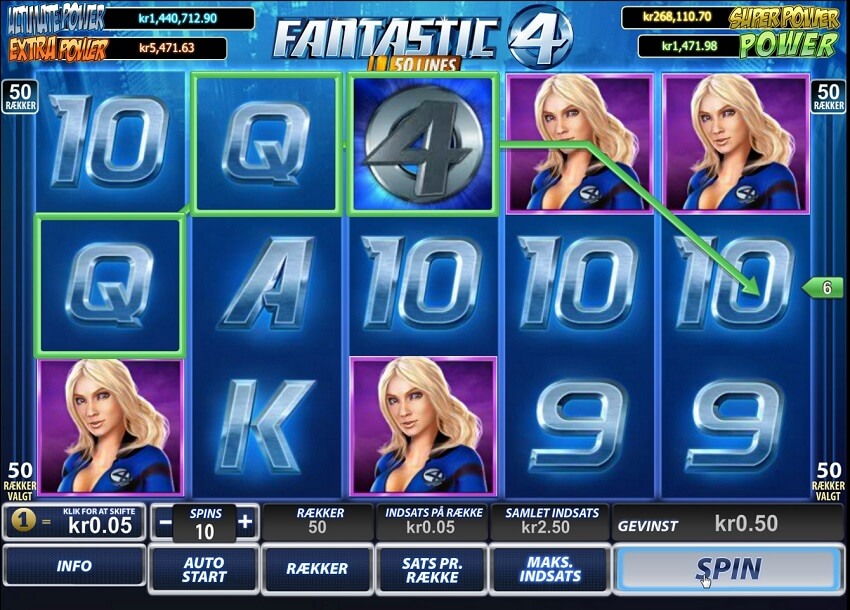