Winter’s coming! Heck, winter is always going to be coming, but you don’t have to be caught out on the cold, especially when you play Game of Thrones Online Video Slots, a game in which the pending cold and doom of winter runs strong. As the most successful fantasy saga to date, and one done with sheer class and attention to detail thanks to HBO®, Game of Thrones has delighted and thrilled viewers from around the world and galvanised many who thought that fantasy was only for a certain crowd. Now the adventure has been handed over to Microgaming thanks to a deal struck between HBO and the gaming giant.

The result is Game of Thrones Online Video Slots, a game that faithfully follows the fantastic, practically flawless television series and comes with some cool win-enhancing features, typical of Microgaming, and well-integrated within the television show’s DNA. If you’re ready to choose your house, why not choose it at Royal Vegas Casino?

The Throne Room is at Royal Vegas

Your very own throne room of gaming entertainment, fun and wins are all waiting for you at Royal Vegas Casino. The Royal Vegas brand has been around since 2000 and has made a solid millionaire out of a good number of players. This casino forms part of a larger group of exclusive online casinos all run by the Fortune Lounge Group. The casino offers over 450 Microgaming powdered games and offers a deposit bonus along with ongoing deals and offers. I’ve always said that the years count when it comes to online casinos, as the true measure of credibility and reliability is age.

If you don’t cut it in this business, it doesn’t take long for players and the necessary organisations to smoke you out. Game of Thrones Online Video Slots is part of the exciting mix of diverse titles waiting to hit five like symbols in a row on your PC or on your smartphone, and that in part is thanks to the Royal Vegas Mobile Casino app.

Microgaming has done a very decent job with Game of Thrones Online Video Slots. I’m a fan of the TV series so naturally I sprung at the opportunity to play this game when it was released in 2014. If I do have any kind of criticism it’s to do with the limiting extent of the licensing agreement. The nature of a license agreement determines what characters can be used and it also involves how the actors feel about having their likeness being associated with gambling – basically a lot goes into attaining a licensing agreement for a big franchise.

Game of Thrones is a fun game but it suffers from a lack of characters from the TV series. In fact, there are none. There are video sequences, money shots if you will, but’s all spectacle and extravaganza – dragons, white walkers – all the effects work. It all adds up to what I will call a faithful and competent adaptation of a faction of the source material.

Game of Thrones is available in both its original online video slot format and a mobile slot format.  Microgaming have also given the game two styles of play. You can choose the fixed payline system of which there will be 15 lines available all taking place on 5 reels, or you can opt for the 243 Ways-to-Win system instead. While no actors/characters are present, the game does have all the houses and their emblems as well as the theme music, exterior shots of the lands and the coveted throne. In terms of features Game of Thrones comes with Stacked Wilds, represented by the logo, a Scatter symbol that can double wins or lead you into the Free Spins bonus game and a Gamble Feature. The Free Spins feature is really good – it’s got all four houses and each one has a set amount of spins and multipliers.

The higher you go with spins, the lower you go with multipliers. My advice, choose the lower spins in favour of strong multipliers. The Gamble Feature is quite different in this game. Gone are the usual cards an instead you’ve got a coin toss and a map – lots and lots of fun in all frankness. 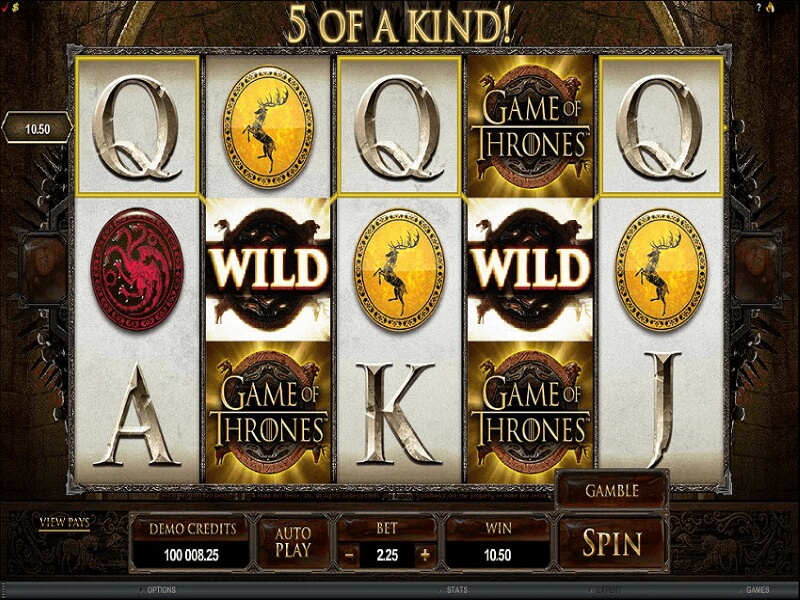