This time round it’s Betsoft’s turn to wow us, and thus far it’s looking pretty good. The game you might ask? It’s called Giovanni’s Gems Online Video Slots, or mobile slots if you will, as most, if not all, sot games that get released nowadays receive a dual platform release, which is great! As you may or may not know, Betsoft are gurus when it comes to 3D video slot games. In fact, dare I say, they’ve turned it into somewhat of an art form. But with Giovanni’s Gems it’s more than just the stylish veneer of the game, it’s also the radically different reel structure employed and with that, the way in which you can achieve your wins.

I’ve often said that NetEnt are real pro’s when it comes to using and capitalising on an incredibly simple concept to give players something new. I’m not going to eat those words, but I am going to say that there’s another sheriff in town and it’s name is Betsoft. So, before myself and the panel of gambling enthusiasts tell you more about this new and innovative game, we thought we’d pay a bill or two and tell you where you can play it first.

Try it at the Rich Casino

We have discussed the Rich Casino, in quite a bit of depth actually. If you’d like to read the full review, scroll down, click on the sitemap and you’ll be able to find it quickly. Alternately you could click right here and get the lowdown. I’ll be brief. The Rich Casino is a 2008 establishment that hasn’t closed down yet and that’s always a good thing. If you can last for a few years in this business, you can last for a few more.

The Rich or just Rich Casino, is a multi-powered software establishment, and this means it’s reliant on more than one software provider for its slew of gaming content. The old days of using one provider are fast coming to an end. These days you need more suppliers to stay relevant and competitive. You’ve got portable and static casino games by Microgaming, Pragmatic Play, Rival and others. In short, give them a shot!

Giovanni’s Gems online and mobile slots forgoes the usual reel structure and instead gives us something new, fresh and enticing. Instead of your usual 5 reel 25 payline setup, this game comes with a 7 x 7 reel system. That’s 7 up and 7 across. It’s all fantasy in this game so expect funny looking men, precious stones and things one would use to mine for these precious stones. This game doesn’t award wins by the normal means either. Instead, a win is awarded when at least 5 like symbols connect with each other. It doesn’t matter how they land, as long as they’re all touching.

Giovanni’s Gem’s comes with that old and well-liked gamble feature. There was a time, not too long ago where it seemed like this feature was being done away with. I think it might have had something to do with overkill. For instance, there was a time when Microgaming couldn’t release a game without giving it a gamble feature. Anyway, I love a gamble feature simply because it’s another way to win and it’s really a 50/50 chance. It’s like playing roulette double or nothing.  Right, so each symbol assigns a certain number of coins when a winning combination is achieved. The highest paying symbol of the lot is the sack of stones with 1 500 coins if 25 symbols touch each other.

Of course this game wouldn’t be receiving love or attention from us if it wasn’t packing some extra oomph. Giovanni’s diamonds create bigger and better wins when a coal symbol is adjacent to a winning combination. The coal turns into a diamond and acts as a scatter symbol. The Free Spins game is kicked off when at least 5 Giovanni symbols appear anywhere on screen. This part of the game can see you getting up to 50 free spins if you’re really lucky and at that point you might as well start getting ready to cash out. 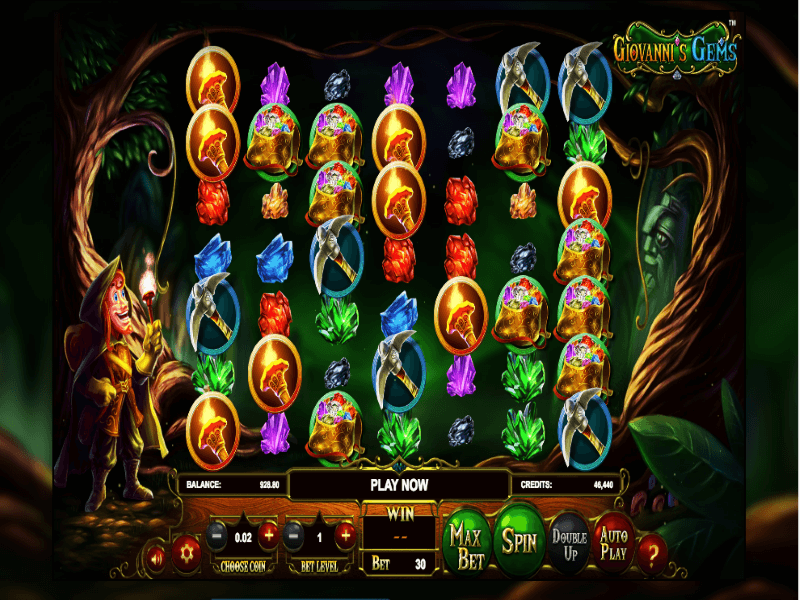