From glimmering surfaces to golden touches, the Grand Spinn online slots game certainly lives up to its name. The relatively new release from software leaders, NetEnt, is as sleek in appearance as it is polished in its streamlined offering. The 3-reel, 1-payline game’s minimalist approach might not resonate with all players, but those searching for a simplistic, yet plush, layout, might just’ve found what they were looking for. Better yet, it offers two game versions – the standard Grand Spinn with 3 jackpots and the Grand Spinn Superpot featuring a progressive jackpot.

Every Grand Spinn element is designed around the iconic Art Deco style of the 1920s, with geometric shapes creating intricate patterns throughout – from the gold-plated backdrop to the framed reels and spinning icons. Even the jazzy soundtrack adds to the online slot’s themed era. While fruit symbols are nothing new to classic slots, the treatment the cherries, oranges, plums and watermelon receive on the reels of Grand Spinn, is uniquely rich. Joining the fruit symbols are triple sevens and bars – all of which will pay out if three of the same icons appear on the centered payline. Plus, you’ll find three different jackpot symbols on the reels. However, don’t get too excited if you see a combination of blank symbols, as they don’t carry any value.

Though one payline might seem like it presents limited opportunities to win, the line-up of fabulous features prove this expectation wrong. For starters, the online slots game boasts Multiplier Wilds, which, when appearing anywhere on the reels, substitute for every other symbol except the jackpot and arrow icons. Each Wild has a Multiplier value of 2x. When one Wild appears, your win will be doubled, when two Wilds appear, it will be multiplied by 4, while three Wilds will equal an 8x Multiplier reward. This brings us to the game’s popular Nudge feature, which can treat a player with up to 14 nudges per reel. This feature is activated every time after a winning combination is revealed, nudging symbols onto the single payline for a chance to win even more. The standard Grand Spinn online slots game also give players a chance to pocket one of three jackpots – mini, midi and mega (worth 40x, 200x and 10,000x respectively), while the Grand Spinn Superpot version replaces the mega with a progressive super jackpot.

A virtual destination, often visited by Canadian players, is YakoCasino. It’s host to both Grand Spinn online slots games, as well as other top titles from some of the most reputable software providers, including NetEnt, Microgaming, Evolution Gaming and Amatic Industries. New players will receive 22 spins, simply for registering an account, followed by a 20% match bonus worth up to C$222 upon making their first deposit. Interesting fact – ‘yako’ means ‘your’ when translated from Swahili, so in fact, as the name says, YakoCasino could very well be your casino. 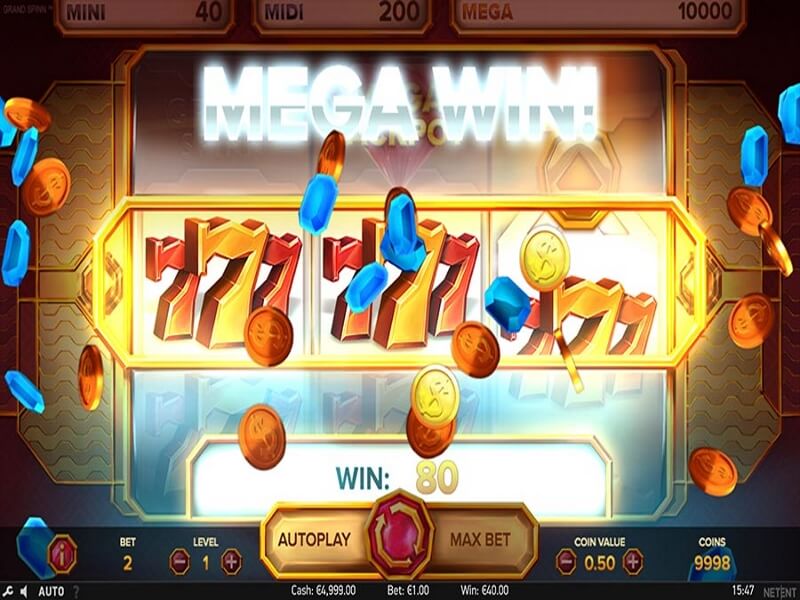