Grim Muerto is part of Play 'n GO's hugely impressive online slots library, and we've loved it every time we have played. We think you will too, which is why we encourage you to try it out for yourself at Cashmio Casino as soon as you have finished reading this review!

“Grim Muerto” is Spanish for “Very Grim”, and the entire game seems to be a cheeky take on the Mexican Day of the Dead holiday. Celebrating the deceased like this can seem a little macabre, but there is a lot to value in Dia de Muertos.

The central characters are 4 members of a mariachi band, who just happen to be skeletons. The high-definition graphics capture the strange beauty of the skulls seen in Day of the Dead festivities perfectly. They are the higher-value online slots symbols, while lower-value playing cards complete the line-up.

A mariachi-inspired soundtrack plays in the background, and also goes a long way to evoking the Dia de Muertos atmosphere in this slots game. Bet as little as 0.2 or as much as 100 on every spin of this 5-reel, 3-row and 20-payline thrill-ride. The theoretical Return to Player percentage is 96.51%, so you stand a good chance of winning the jackpot (1000x your total stake) or any of the other payouts.

The special features that are seen in online slots are what make them especially exciting to play. The Wild Symbol gets the festivities going here. Represented by a Spanish guitar, it will replace almost every other icon to help create paying combinations.

The only icon that the Wild is unable to stand in for is the Scatter Symbol, which comes in the form of a book. When 3 or more of these are seen anywhere on Reels 1, 3 and 5, you're rewarded with 10 Free Spins. During this Bonus Round you'll see special Candle Scatter Symbols, which will activate extra Free Spins. Land 1, 2 or 3 of them, to get 3, 6 or 9 extra spins respectively.

In Spanish, “Marco Siniestro” means “Sinister Frame” but this is actually a highly rewarding special feature. For every spin in the base game, a random reel will be highlighted with a not-so-sinister frame.

If a Wild lands on the highlighted reel, it will expand and fill all positions. Marco Siniestro is also active during the Free Spins round, but will be seen on anywhere between 2 and 5 reels. One of the mariachi skeletons will also be randomly selected to act as an extra Wild.

Since we are talking about the Day of the Dead, who wouldn't want a second chance at living when their time comes? That's the idea of this online slots extra feature, which is triggered when 2 Scatter Symbols land on the reels during the base game. When this happens, you need to choose one of the musicians on the screen at the time.

You've got a second chance at playing the Free Spins Bonus Round, since you could reveal a third book. You might also uncover a cash prize, or nothing at all. Like so much in life, it's a gamble and you have to play to know! 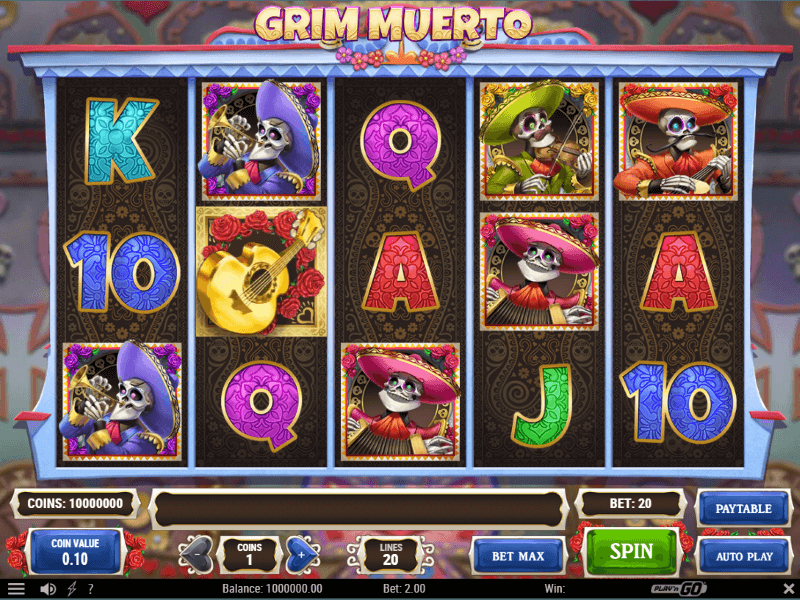