Hellboy Slot is one of the hottest Slots around – the explosive thrills, the sizzling Jackpots and the adrenaline-pumping action will keep you entertained for hours. Themed around the comic book stories of a harmless hell-spawn, this popular Slot has a huge fan base – check it out for free below and see just how much fun you can have with the loveable rogue that is Hellboy.

A 5 Reel, 20 Payline Slot, Hellboy’s got everything you could hope for and then some. There’s Wilds, Multipliers, Scatters, Free Spins and not one but TWO Bonus games that offer the most colossal cash prizes. Hellboy slot features graphics in a style reminiscent of Jamie Hewlett, an artist with whom all comic book fans will be immediately familiar. A starry night city skyline forms the backdrop to the games reels that are filled with characters from the film. You’ll come face to face with Hellboy himself, Abe Sapien, Trevor Bruttenholm, Liz Sherman and a baddie. There are also the usual playing card symbols of 10; J, Q, K and A that make up these slot’s lower value icons. To add to the games intensity there’s a great soundtrack that plays as the reels roll.

If you’re lucky enough to land three of more Scatters, represented by Hellboy’s Fist, you’ll be transported to one of the most exciting Bonus games I’ve played in a long time. Here it’ll become your mission to discover the Hidden Relic of Power, guarded by some fierce and furious hellbeasts, travelling through the underworld to win some serious cash rewards. If you find team members en route then you’ll receive prizes, but blocked tunnels will bring your Bonus round to an abrupt end. The other Bonus feature – also an exciting and lucrative addition to the game – is the Supermode. This feature is randomly triggered to grant 10 Free Spins with 3 held Wilds, promising some potentially incredible payouts. The fact that there’s no telling when this bonus feature will kick in makes game play all the more exciting and adds an extra element of suspense to every spin.

Take a Risk and Win with Hellboy

If you enjoy a little bit of a risk then Hellboy’s Gamble Feature is right up your alley. A popular feature in many Microgaming slots games, this optional game can be activated after any winning spin. You’ll be transported to a second screen game where you’ll have a choice of predicting the colour of a playing card for a double win, or the suit for a quadruple win.  You can pick up to 5 times in a row, but if any of your guesses are incorrect, you’ll lose your winnings and return to the base game empty handed. Fortunately, Hellboy is such an enjoyable online slot you won’t mind having to play it all over again! Hellboy is a serious scorcher of a Slot and I can’t recommend it highly enough. If you don’t believe me, check it out below for free and see for yourself that this really is one hell of a game. 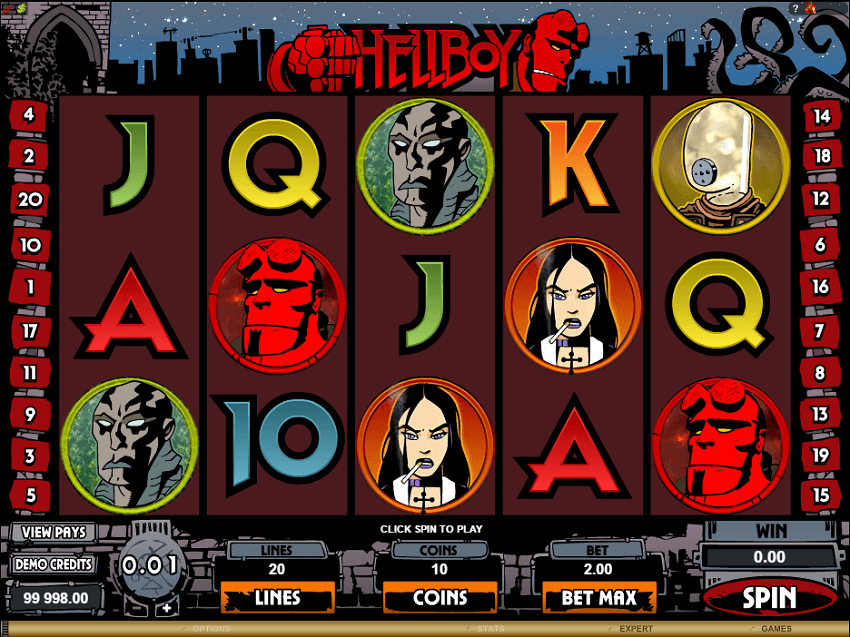