The original Hotline™ online slot was a hit in Canada, and the rest of the world, thanks to its exciting features, absolutely gorgeous graphics and captivating audio. Now, NetEnt have released Hotline™ 2. With even better looking images, smoother gameplay and an upgraded soundtrack, this follow up online slot is set to become the new favourite amongst all manner of players, whether fans of the original or not. So, if you’re keen to take a top-down drive through Miami all over again, then don your favourite shades and let’s go!

Set against a charming night time cityscape, Hotline™ 2 boasts 3 rows and 5 reels, with 243 ways to win – which can be extended to 1944, which we will discuss soon. A typically 80s soundtrack accompanies as you play, with imagery on the symbols to add to the theme, which you will come to realise as being centred around a jewellery heist.  Detectives Quinn and Riviera are back at it, and appear as symbols on the reels, along with Kitty Weiss sipping a glass of champagne, and a man with a microphone. The 5 lower values are represented by various jewels, each of which looks remarkably detailed and valuable. The neon flamingo logo is the Scatter, and it has the power to trigger a round of Free Spins when you land at least 3 of it across the reels. The image of a road sign and car chase is the Wild, and will take the place of other symbols in an attempt to help you hit winning combos, with the exception, of course, of the Scatter

Now, the Hotlines feature that you may be familiar with from the first game, makes an appearance here. The 3rd reel is always known as a Hotline, but you can increase this to include reels 2 and 4 as well, for a portion of your bet. Any Wilds that land within a Hotline, and will result in a win, will see that Wild expand to cover the whole reel. Should you land a Wild in a Hotline during a Free Spins round, it will expand regardless. Last, but certainly not least, Wilds that land during Free Spins also have the potential to increase the number of rows / symbol positions within that reel, which is how the ways feature can expand to a staggering 1944.  The game really is so varied with its potential rewards that every spin is exciting. But, if you’re on the impatient side, you can use the Buy Feature at the bottom of the screen to actually use some credits to buy 7 Free Spins with up to 3 Hotlines active.

There’s much to be said about Hotline™ 2, and the creation of an online slot in Canada that improves upon its predecessor without in any way overshadowing it. This game is just such an example and can be enjoyed at any number of online gaming establishments that support NetEnt software. Our recommendation? LeoVegas Online Casino. This gaming hub is packed with some of the most thrilling online casino games around, from online slots to table games and much more. With a range of exciting promotions and plenty of safe banking mechanisms to boot, you’ll never need look elsewhere again. 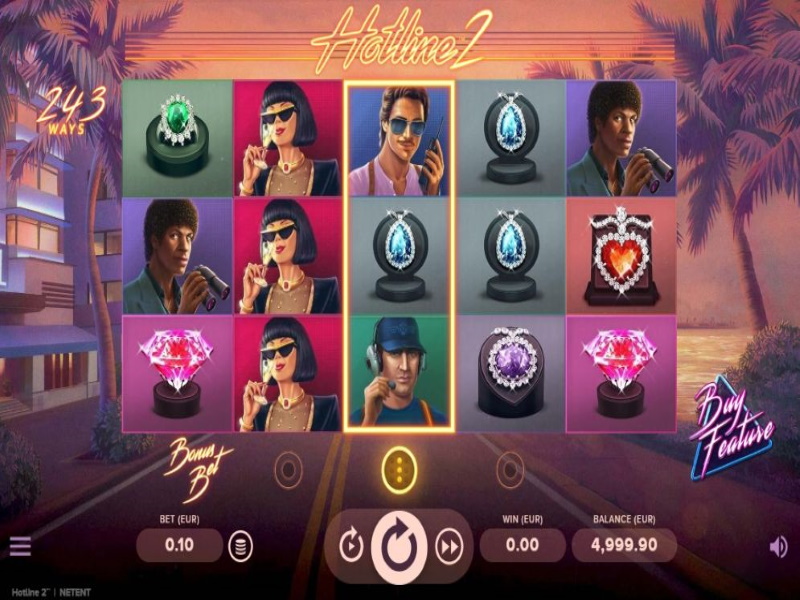