Jack and The Beanstalk™

We don’t very often think of fairy tales and casino games like online slots coexisting in the same space, but it certainly becoming more and more popular to blend the two genres. Controversial as this may seem, there is perhaps something to be said about appealing to that aspect of ourselves that still believes in magic, or finds joy in reminiscing about the good old days. Jack and the Beanstalk™ is a worldwide classic, and the theme of NetEnt’s entertaining online slots game release featuring all of the characters you will remember from the original tale. With a decent betting range and generous payout potential, the game is sure to appeal to all manner of different players, whether they’re fairy tale fans or not. Let’s take a closer look at this online slots game.

Jack and the Beanstalk is a 3x5-reel online slots game with 20 paylines, a maximum possible wager of 100 credits and a minimum of 0.20. As is typical of so many NetEnt slots, the game opens with a short little cinematic, featuring Jack running from the castle of the two-headed giant, with their prized, golden-egg-laying hen in hand. The reels are set against a detailed background of Jack’s house, with the star of the show regularly popping his head out the door to check on you. The symbols include Jack, the giant, a goat, an axe and a watering can. The lower value symbols are represented by A, K, Q, J and 10, all of which have been stylised to look like they’re made of the same plant material as the beanstalk itself. The game name logo is a Walking Wild, which means that, every time it lands on the reels, it will trigger a re-spin, and move one reel to the left. The re-spins will continue until this symbol has left the grid completely. This isn’t the only Wild feature in the game, with 3 others being the Stacked Money Bags, the Stacked Golden Hens and the Expanding Golden Harps. These features can be triggered by landing the key symbol on reel 5. The number of keys you manage to collect will determine which Wild feature you trigger. We won’t spoil the fun for you here, though. If you would like to find out for yourself what they are, read below and learn where you can play Jack and the Beanstalk.

If Jack and the Beanstalk sounds like the kind of game you would be interested in playing, you will surely find it at any number of online casinos that support software from NetEnt. Our personal selection is BitStarz, an online casino that prides itself on offering bitcoin as a usable currency, along with some other well-known cryptocurrencies. Here, you will find a wide selection of online slots, table games and even a Live Casino offering. There are plenty of fun and exciting promotions to take part in, too 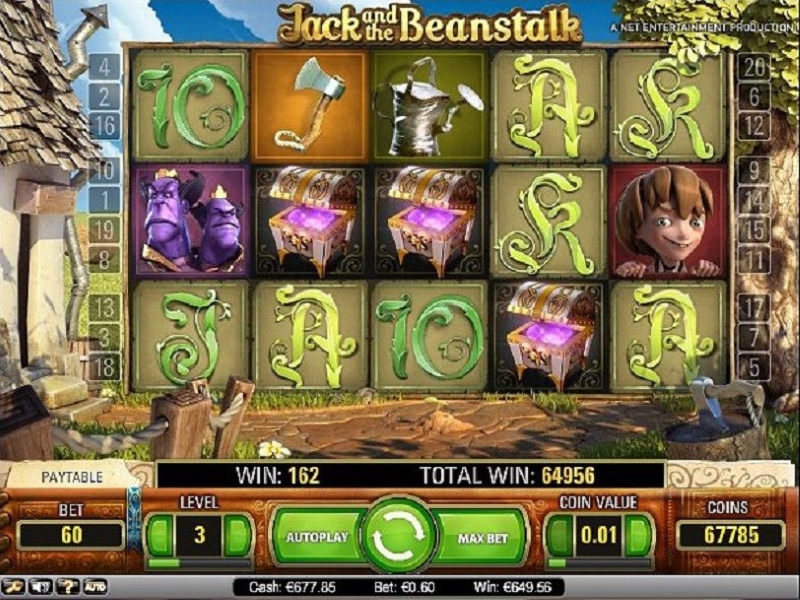