Kingdom of the Titans Slots

Kingdom of the Titans Online Video Slots relies on an old and well-known theme commonly used within the online casino industry – that of Greek mythology. This theme is always a winner. I cannot think of a software company that hasn’t produced one, two, maybe even three games based on Greek mythology or just ancient mythology in general. And why not? It works because people are generally fascinated by the old gods of eons gone by. This is why the Egyptian themed video slot games are also so popular too. Microgaming gave us Stash of the Titans and Thunderstruck, Playtech gave us Goddess of Life, NetEnt gave us Hall of Gods and now we have WMS giving us Kingdom of the Titans. First things first, if you’re looking for something that’s going to dazzle you visually like Thunderstruck II for instance, forget about it. Kingdom of the Titans is a by-the-book online video slots with simplistic graphics. Having said that, it’s still a casino game with enough to offer up winning rewards.

Kingdom of the Titans is a 5 reel, 3 row, 30 payline game that features artwork inherent during the heyday of gods and titans. Expect to see gods and goddesses, ancient coins with the faces of gods, armour, harps, swords, shields and vases – all appearing as symbols upon the reels. The Wild of the game is represented by the Kingdom of the Titans logo while the Scatter is represented by the Mt. Olympus symbol. As always, these two symbols follow their standardised respective roles – the Wild substitutes all other symbols except for the Scatter. In this game the Wild is active on reels 1, 3 and 5.

I’ve described Kingdom of the Titans as a rather simplistic online video slots game thus far. I did however say it had enough to offer up rewards. The first major feature of the game is the Spinning Streak feature and what this entails is the following: a winning combination gets frozen and held in place while the rest of the reels continue to spin thus creating the chance of more wins.  The Spinning Streak feature stays active as long as you continue to get winning symbols.

This casino game is pretty demanding with its Free Spins feature and I’m saying this because the majority of online video slot games that I have played usually require that you land 3 or more Scatters in order to get the free spins feature going. Not Kingdom of the Titans – this one starts to reward free spins once you land 5 or more.  The amount of spins to Scatters is as follows:

A major advantage of the free spins feature is that you can trigger the Spinning Streak and find that your wins can be multiplied by between 2x and 10x.

Play the game at Slots Magic

If you’re intrigued by Kingdom of Titans Online Video Slots, why not give it a whirl right now at Slots Magic? This online casino offers games made by renowned companies like Amaya, NetEnt, NextGen and SkillOnNet to name just some and if you’re a first timer you can get up C$100in bonus cash with the added bonus of 50 Free Spins on a slots game of the casino’s choosing. At the moment these are three games from the NetEnt stable of titles but is subject to change. There is no time like the present to play to win! 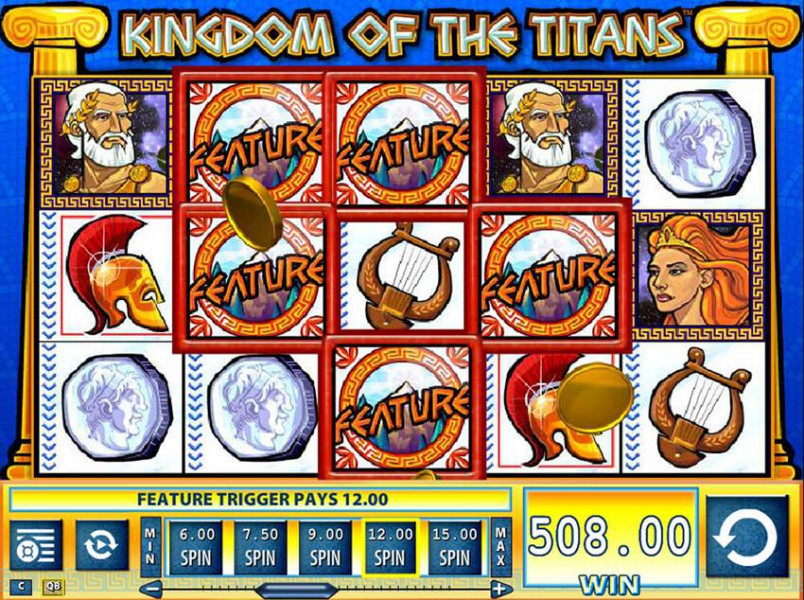