Even if you weren’t around in the 80s to make the most of hit music and movies, chances are you’ve at least managed to familiarise yourself with some of the classics. Rival Software’s ‘Lucky Labyrinth’ online slot game is loosely based on the movie featuring the late David Bowie as a goblin king who steals a young boy from his sister, who then has to make her way through a massive maze filled with dangerous traps and interesting characters in order to find him. The Lucky Labyrinth online slot features impressive graphics and fitting audio, along with some beautifully rendered symbols and in-game features. So, don’t get lost just yet – enter the labyrinth.

Lucky Labyrinth is a beautifully designed 5-reel video slot with 30 paylines. The backdrop to the reels features both an intricate hedge-maze as well as an even more difficult looking one with high walls, and the goblin castle in the background. The minimum bet is 0.01 credits while the max is 75, making it a fairly decent choice for all kinds of players, from newbies to veterans, alike.

The symbols of the game feature characters from the story, including Didymus, Ludo, Hoggle and a goblin, as well as the goblin King, Sarah the girl and her baby brother, Toby. The owl symbol is Wild, and can expand to cover an entire reel. What’s more, this symbol offers a 2x multiplier during normal spins and a 3x multiplier during Free Spins rounds. The Free Spins symbol will, obviously, grant you with up to 15 Free Spins if you land a minimum of 3 across the reels.

Landing 3 of the Drop Icon will trigger the Drop Feature, in which subsequent winning combinations will disappear from the reels, leaving space for more to fall in their place. It’s a unique twist to the game, and isn’t something a lot of online slots games feature, normally having one mechanic or the other. During such a round, you also stand to score some incredible multipliers on your stakes!

As with so many online slots games, there is an Autoplay feature, which will let the reels spin on their own until you score a winning combination. While it’s a great way to win in the background, you won’t want to take your eyes off the stunning animations on the screen.

If you’re keen to immerse yourself in some fantasy action, packed with animations and whimsical creatures, then you’ll definitely want to play Lucky Labyrinth. The game is available to play – along with a host of other Rival productions – at Rich Casino, where new players are warmly welcomed with a generous sign-up offer of a 200% match on their first deposit, plus 25 Free Spins on a selected game. If you aren’t already a member, become one today and discover the magic of Lucky Labyrinth. 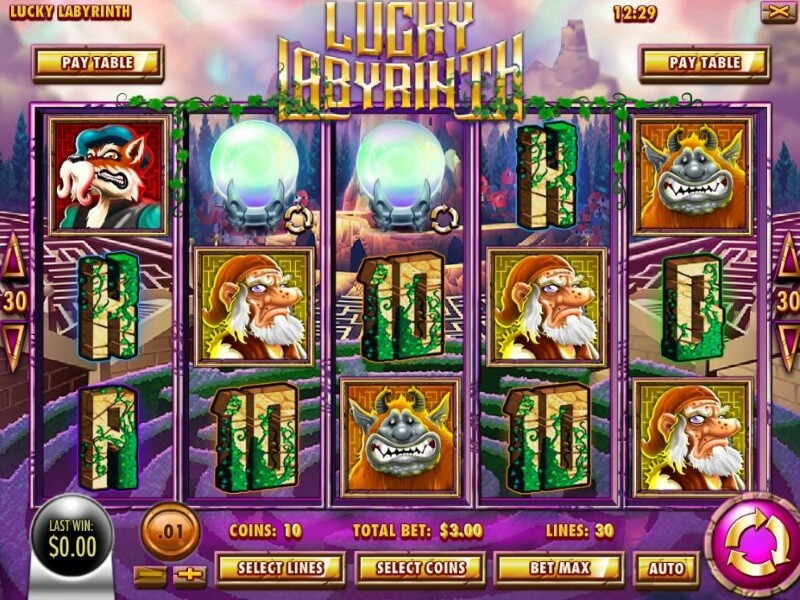