Mermaids Millions Online Video Slots is many, many things – so many that I actually wouldn’t know where to start. It’s one of the real success stories from the Microgaming catalogue of video slots games. Don’t get me wrong, when it came out, Microgaming had already been making online casino games for at least 10 years, so they were in no way wet behind the ears. However, with Mermaids Millions the company created a game that would create its own legend and spawn many others just like it.

The Mermaids Millions gaming template would also be replicated over and over again to be seen in many subsequent titles. Many video slots purist deem Mermaids Millions to be a perfect slots game, a realisation of everything a player could possibly hope for in a slots game. I wouldn’t go that far, but I can see why some aficionados feel this way. If in any way you feel the inclination to play this true classic, Royal Vegas is just a click or a swipe away!

Millions lie in wait at Royal Vegas – well, that’s if you elect to play one of the casino’s progressive video slot games. As part of the Microgaming network, Royal Vegas has the ability to offer progressive jackpot titles that literally top the million dollar mark. To date Microgaming powers roughly 160 operators, so imagine something dripping in from each of those operators into one pot? Royal Vegas is one of the older Microgaming powered online casinos. It’s been operating since 2000 and has in more recent times acquired a mobile casino app as well as live casino games.

So yes, there’s a fair amount going on and while it has moved with the times, it still sticks by certain traditions like offering new players its famous match deposit bonus. Yes, there will be terms and conditions – all casino bonuses have T & C’s – but the fact of the matter is that it’s still a nice way to get things going. VIP status, loyalty points and on-going promotions and deals account for the rest of the player incentives.

I must admit that even by today’s standards Mermaids Millions holds up very well, and I say this amidst the current climate of games. I’m talking about the breakthroughs being made all the time by companies like NetEnt, Play n Go and Betsoft to name but a few. Today’s online video slots games are looking so hip, cool and advanced, that to pair Mermaids Millions with them can at times seem like taking a knife to a gun fight. However, this is not the case at all because Mermaids Millions still looks good – the graphics and sounds have stood the test of time and thanks to the kind of features that the game offers, it remains incredibly likeable. The smooth running MGS engine of the game is great and I can see why it was used immediately afterwards in Tomb Raider Online Video Slots.

Playing Mermaids Millions is an absolute delight. The game looks good and it plays good too. Plus, Microgaming have given it all those classic features inherent in many titles released in the years after. It’s got 5 reels and 15 paylines and let’s face it, you don’t actually want more paylines than that. Debate continues but in my opinion, the less paylines, the better your odds. Outside of the fact that it has a Scatter and a Wild – these are common place - the game is equipped with two bonus games and this really adds to its appeal.

You’ve got your Free Spins thanks to three or more Scatters, represented by the lovely mermaid. Plus all wins are trebled – nothing wrong with that. It’s rounded off by the Treasure Bonus, ignited when three treasure chests land on an active payline to take you into a pick-and-reveal bonus where all kinds of sunken relics lie on the ocean floor waiting to be opened for cash by none other than you! 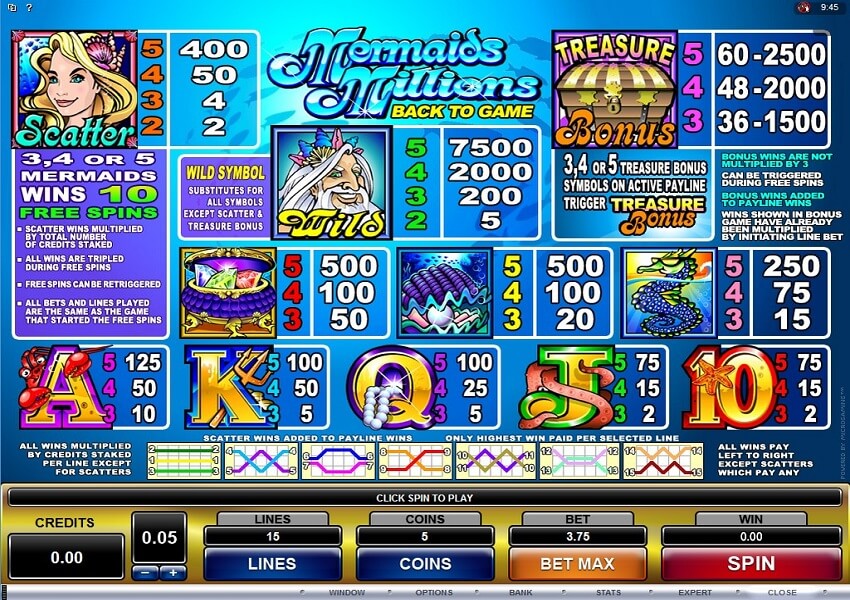