Are you ready to enter the haunted house and confront ghouls, ghosts and the un-dead in your quest for major cash prizes? Join ghost hunters Thurmingham and Carstairs as they take on ghostly apparitions in the hunt for jackpot prizes!  Based in Victorian Britain, this Microgaming online slots game really shows off the software developer’s skill in creating a gloriously graphic rich game that’s immersive, entertaining and rather spooky!

The creepy soundtrack adds to this online slots atmosphere and its certainly one of the best Canadian casino games on offer. The reels are set against a pipework frame and an industrial Victorian-era scene of smoke and factories is depicted.

With a Wild, Scatter, Multipliers and stunning Ghost Zap Feature there is plenty to play for in this creepy Slot packed with winning potential! Ghost busters Thurmingham and Carstairs are the Wilds and will only appear on Reels 1 and 5 respectively to help you build big winning combinations. They substitute for all Symbols across the Reels except for the Haunted Mansion Scatter.

Landing 3 or more of the Haunted mansion Scatter across the reels will instantly trigger the lucrative Ghost Zap Feature. Once the Ghost Zap Feature rumbles to life you’ll see the Ghost Meter set at 8 and this shows the number of ghosts you’ll need to capture. Thurmingham and Carstairs will help you capture the ghosts including the red, yellow, green and blue ghosts that land in a row to reveal a capture bonus prize of 2x the triggering bet.

When both Thurmingham and Carstairs appear on the same row each captured ghost will reveal a capture bonus of 4x the original bet. Whenever you catch a ghost it will deduct 1 from the Ghost Meter and once the meter reaches 0 it is possible to reset it by retriggering the Feature.

Phantom Cash is an easy game to play and will suit all slots enthusiasts. There are up to 20 available paylines in play at any time and before you hit spin you can choose to wager 0.01, 0.02, 0.05 0.10 or 0.25 coins per payline. The games paytable clearly outlines what your winning potential is when betting certain amounts, and what symbol combinations you need to land in order to win.

Don’t be scared to make use of the game’s AutoPlay option either! This lets you set your coin and line bet and spin the reels for a set number of turns automatically, leaving you to do nothing more than sit back and watch as the ghoulish storyline unfolds before your very eyes!

Get ready to indulge in frightfully rewarding gaming with Phantom Cash and the roguish ghost trackers Thurmingham and Carstairs. Do YOU have what it takes to trap up to 8 Ghosts in the Ghost Zap Feature and lay your hands on some terrific cash prizes as a result? Play today and enjoy rewards so big, they’re scary! 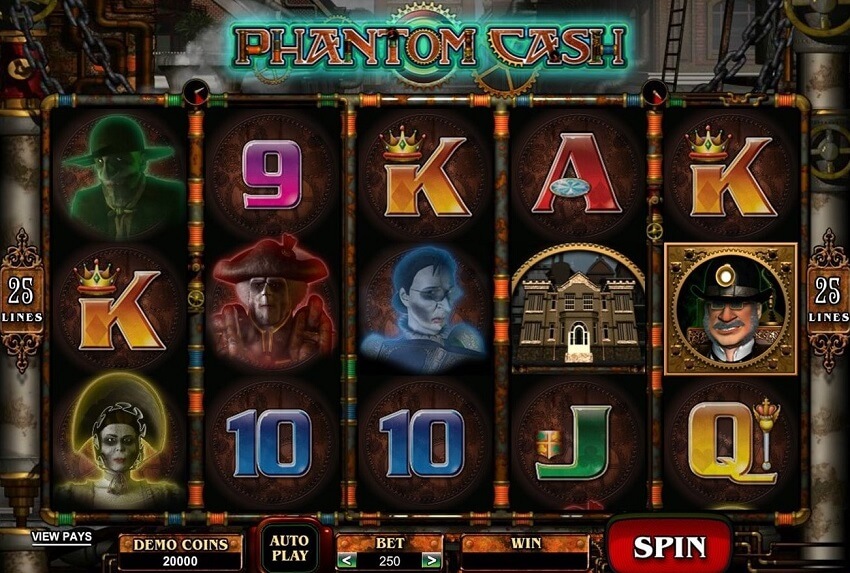