Featuring 30 fixed paylines, a max win value of up to 150 000 credits and a whole bunch of bonus features, Playboy™ Gold Jackpots stands out as not only a stylishly fun online slots game to play, but has all the promise of being a hit amongst Canadian players on the lookout for a richly rewarding experience, too. Available to play at JackpotCity Casino, our recommended casino for Microgaming creations, you’ll find this slot to be as expertly designed as every other title they release. Before telling you a bit more about JackpotCity and why it stands out, let’s take a look at what symbols and features you can expect to find on the reels of Playboy™ Gold Jackpots.

What would a Playboy™ slot be without a few playmates? In this particular creation, you’ll have no less than four playmates to accompany you on the reels, who form the high-paying symbol set and include Stephanie, Hiromi, Gia and Carly. As with the low-paying symbol set, which include stylised star, spade, heart, club and diamond icons, you’ll need to secure between 3 and 5 of each symbol on any of the game’s 30 active paylines in order to trigger a win.

Playboy™ Gold Jackpots includes several features: Wild Multipliers, Synchronised Reels, Reel Nudge, Wheel Bonus, Free Spins and Jumbo Blocks. Wild Multipliers can award up to 5x Wild wins whenever a Wild substitute forms part of that win, while Jumbo Blocks can appear after any regular spin made during the base game. To activate the Free Spins feature, which awards 10 Free Spins at a time, you’ll need to secure 3 Wheel Slices (which are three reel panels revealing a partial image of a whole Wheel) alongside each other. During Free Spins, Multipliers wins of up to 25x are possible, and 15, 20 or 25 Free Spins can be retriggered under the right conditions.

JackpotCity Casino is our top online and mobile recommendation for Microgaming slots in Canada, of which Playboy™ Gold Jackpots is unsurprisingly one. Filled from floor to ceiling with image-rich games that are infused with big win capabilities, JackpotCity further impresses with its customer-focused approach to gaming, which includes scores of daily bonuses, two dedicated support channels, incredibly safe payment options and a hearty welcome bonus for new members. Playboy™ Gold Jackpots is just one of the many popular games you’ll find once signed up and logged in, offering you the chance to unwind in style on your choice of mobile or desktop devices whenever it’s convenient for you. 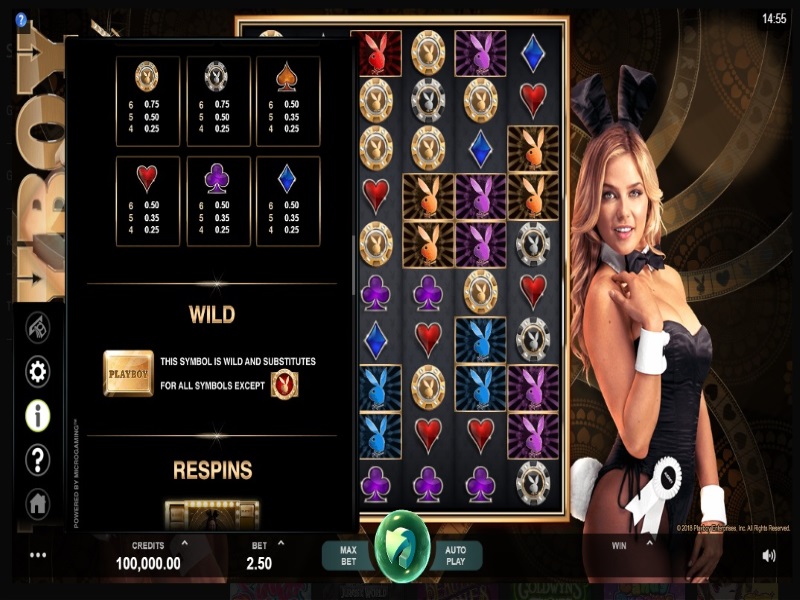