Yggdrasil Gaming’s timing could not have been better with Pumpkin Smash, a new video slot games playfully based on the Day of the Dead celebrations. Yggdrasil chose the late month of October to release this one in the hopes that players who like celebrating Halloween would take to it like a stick to a piñata.

Here at Gamblinginsider we’ve always tried to bring you the news just as it broke or just after and we’re pleased to announce that this game is fresh off the boat. The good news is that Yggdrasil Gaming does an all-out rollout, which means that all online and mobile casino operators who are affiliated with this software provider will receive the game. The graphics are comical and yet macabre and before we tell you more, we thought we’d first kill two birds with one stone – pay some bills and tell you where you can play it right now!

You can play it at GUTS

We’ve done a full review for GUTS already and if you want to know more about it you can just click through to our sitemap. We won’t hold you up with this one; what we will say is that GUTS is a pretty decent online and mobile casino operator with its roots firmly entrenched in the UK, which is where the casino originates from. In fact, the GUTS brand started off on in the land-based sector of gaming before taking to the online space.

GUTS is notable for its various software suppliers, its provision of live dealer casino games and its sportsbook, which is ideal for any Canadian player looking to bet on his or her favourite sport.

Pumpkin Smash is a dual-platform casino game, meaning it will function as both an online video slot and a mobile slot game. Yggdrasil Gaming have worked hard to make this game as unique as anything they’ve produced beforehand. This is always a good quality to behold, especially if you’re in the business of creating video slot games. Players love it when you can give them a new spin on an old and well-liked formula.

Pumpkin Smash offers a fresh and welcome take on the horror genre, if one can call it that. The game is actually quite simple but what it doesn’t have in numerous features, it has in solid winning possibilities. And that more than anything else is what you’re really looking for.

To say that Smash pumpkins would be the best online slots game to play would be pushing things, but we must admit that it is a fun game. The world of online slots for real money is littered with mediocre titles that do little to excite the senses or ignite that yearning for an earning. This is not the case with Smash Pumpkins. This game sports authentic graphics and sounds which make for an immersive and engrossing experience and when it comes to winning, a fair amount stands to be gotten.

The two main symbols to look out for are the Scatter and Bonus symbols. The skull-littered Wild is pretty regular; it replaces other symbols to make better wins for you. The Bonus symbol on the other hand, now that’s one for the books! This ridiculous pumpkin symbol takes effect if just two land on the screen at the same time, the more, the better. You need at least two to fire things up. You’ll be taken to another section of the game where you’ll need to smash pumpkins from which three things will emerge – an actual coin amount to pocket, a fixed number of free spins and a multiplier that could be anything between 2x and 7x. Now if that’s not pretty darn decent, then we don’t know what is! 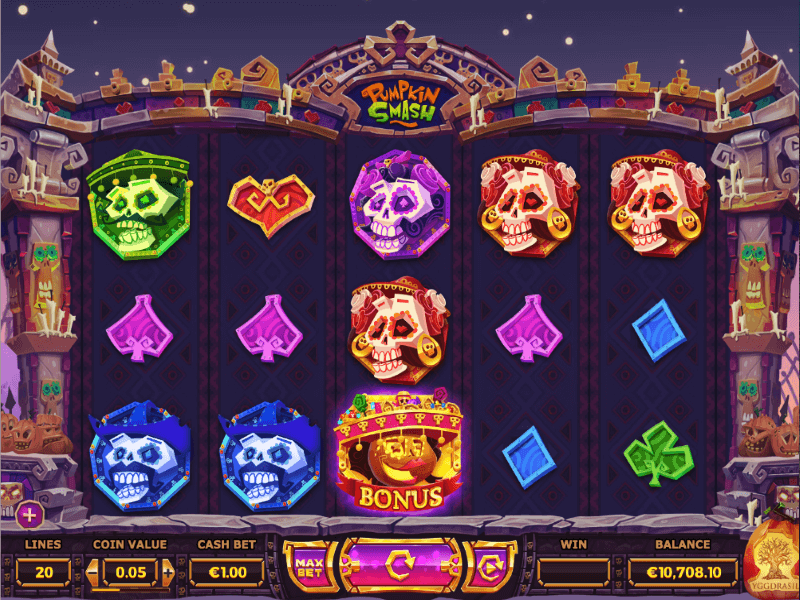