Ancient Egypt continues to dominate the slots arena, this time in a Pragmatic Play release aptly called Pyramid King™. Featuring a super-catchy soundtrack that seems to get your hips swaying whether you give it permission to or not, this turbo-spin-enabled 5-reel slot boasts no less than three jackpots, amid many other attractive bonus opportunities. Colourful, classy and complete with an eye-catching array of theme-appropriate symbols, we test out Pyramid King™ at PlayOJO, which tends to be our favourite platform for online slots in Canada. The reason? We’ll reveal that a bit later on. For now, let’s focus our attention on this 25 payline beauty, discovering all that she has to offer, apart from jackpots of up to 1000x your bet size.

Regardless of your bet size, Pyramid King™ is ready to reward with a range of symbol payouts and bonus features. Whereas symbol payouts kick in for 3 to 5 of a kind, bonus features are awakened under very specific trigger conditions. Helping form symbol payouts is the slot’s Pharaoh Wild symbol, which acts as a stand-in for all icons, save the Scroll Bonus and Camel Money symbols. The Scroll Bonus is responsible for triggering Free Spins when appearing on reels 1, 3 and 5, while the Camel Money symbol is a bit more intricate in function.

With the ability to appear on any reel, and indeed included on every reel, the Camel Money symbol is the key to activating a sought-after feature: Money Respins. Beginning with 3 respins following a win, every time a Camel Money symbol appears during Money Respins, it will stick in place, resetting your Respins total back to 3. What makes the round end? Either when the Respins run out, or when your screen is filled with 15 x Camel Money symbols. Trust us when we say you’ll be wanting the latter, as this triggers the Grand Jackpot payout, the value of which is displayed along the top of the reels. Bear in mind that jackpot values are fixed, based on your bet size, with the Grand Jackpot paying out 1000x your bet size when activated.

The Camel Money symbol is also the icon you’ll need to trigger the Minor or Major jackpots, which occur at random, awarding an instant payout of 30x and 100x your bet, respectively.

Where to Play Pyramid King™

Always one of favourites, PlayOJO offers online slots players in Canada the chance to play hundreds of fun, themed casino games – Pyramid King™ and other Pragmatic Play releases included. With a constantly expanding line-up of slots, regular and optional promotions, ease of navigation and plenty of trusted deposit and withdrawal methods to pick from, PlayOJO ticks all the right boxes that we feel an online casino should. Mobile-friendly, you can also take PlayOJO – and by default, Pyramid King™ – with you wherever you go. If you’re interested in finding out more, now or later, feel free to head over to their website to snoop around. You’re welcome any time. 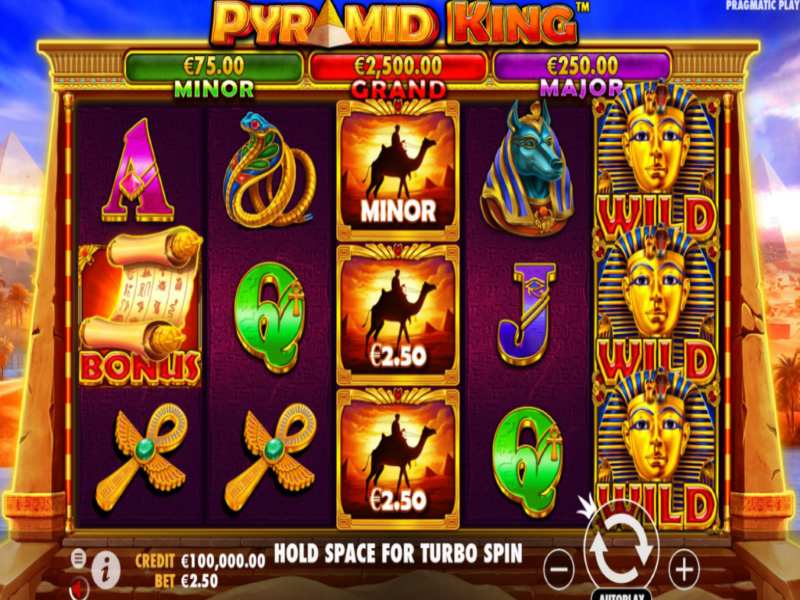