The phoenix has, over the years, become one of the most popular and well-known mythological creatures in the world, appearing in a multitude of different cultures’ myths and stories, including Chinese, Egyptian, Greek and Middle Eastern. In Red Tiger Gaming’s online slots game, Red Phoenix Rising, it’s the Chinese version of this mystical bird that gets the spotlight. While there are many different versions of the phoenix’s life cycle, the bottom line remains the same across the board: the phoenix is born from its own ashes, lives a long and prosperous life, then builds itself a funeral pyre, upon which it ignites and burns to death, to be born again from the ashes. Rendered in a style that represents Chinese calligraphy, Red Phoenix Rising tells the story of the phoenix, with the added benefit of potential wins along the way. Let’s take a more detailed look.

Red Phoenix Rising is a 4x5-reel online slots game with 40 paylines. The betting range of this title is somewhat humble, with a minimum possible wager of just 0.20 credits and a max of 20. The reels are set against an ornate looking palace courtyard, with the grid itself being bordered by intricate red feathers. The symbols include a young phoenix, rising from its ashes, a feather, a tree and a flaming peach. Then you have the A, K, Q, J, 10 and 9 icons, looking like they’ve been painted with an intricate calligraphy brush. The Yin Yang symbol is Wild, and can take the place of other symbols across the reels to assist you in forming winning combinations. The symbol of the phoenix with spread wings is the Scatter, and will award you with Free Spins when you land at least 3 on the reels, with a random multiplier attached. The golden phoenix egg will award you with a random multiplier when you land it on the reels. Continue to click or tap it and the size of that multiplier will grow until it hits an arbitrary amount. You’ll notice a large crystal on the left hand of the reels, which will randomly award a multiplier to any winning combinations you might get. Interestingly, the max number is 88x, with the number 8 being very auspicious in Chinese culture. 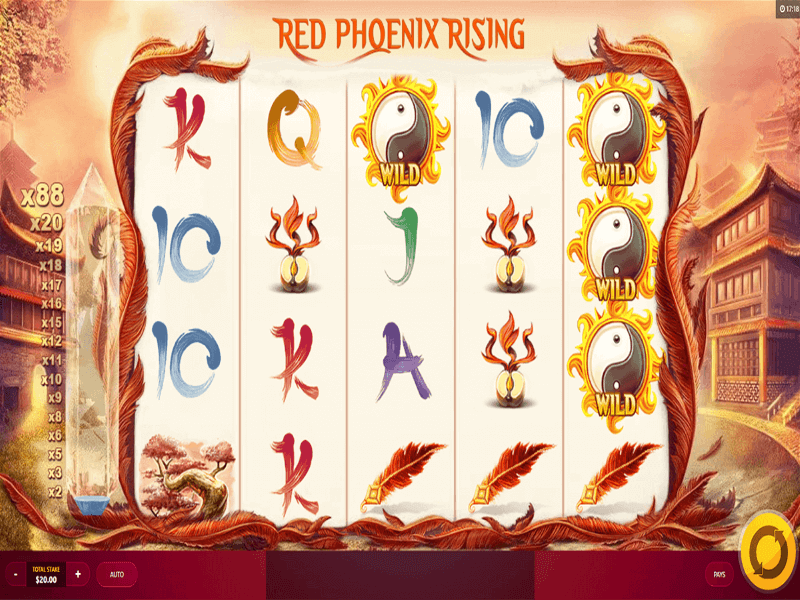