Playtech’s phenomenal Rubik’s Cube slot draws inspiration from the old puzzle game, though it doesn’t require players know how to solve the cube in order to land a big win! Instead, it’s more the art style and theme that’s taken from the original game, offering a healthy dose of nostalgia for those who remember the Rubik’s Cube craze from first-hand experience. A top-quality game, this is one online slots Canada players will love, and it’s initially available exclusively at SIA Casino, before it’s released globally.

The slot features 5 reels, 3 rows, and 25 paylines and a host of interesting features that are key to racking up massive wins.

When a game is based around a puzzle box, you know it’s going to be a colourful one! Rubik’s Cube is positively bursting with all the colours of the rainbow, with the highest paying symbols depicted as a block of colour, strongly reminiscent of the actual puzzle game. Green, orange, blue, yellow, red and white populate the reels.

These classic colours are joined by the traditional 9, 10, J, Q, K and A, although even these typical symbols have been appropriately coloured, tying in accurately with the game’s theme.

The special symbols are where the game gets interesting for online slots Canada fans, since every effort has been made to tie everything together neatly. There are no base Wilds in play. Instead, Wilds are potentially created by the cube that floats above the reels. But we’ll get to this in the features section.

The Scatters appear as a Rubik’s Cube that’s being turned in space, as if it were being solved. Players will need to land Scatters in order to get a crack at the biggest payouts up for grabs.

As would be expected, the special features all tie in with the Rubik’s Cube’s colours. The cube that floats above the reels will randomly form a complete pattern between spins. If the cube creates a successful pattern it will show a solid colour. All the symbols that correspond with that colour on the reels will transform into a Wild, complete with an attached multiplier. The multiplier awarded corresponds to the value of each colour, ranging between x2 and x7, white being x2, and red x7.

When 3 Scatters land simultaneously, the player is allowed to pick the colour they want to be the Wild, and its attached multiplier. However, the number of Wilds on the reels will also scale, with the bigger the multiplier, the less of that Wild on the reels. During the Free Spins, the multiplier Wild will also become Sticky, but only on the centre 3 reels.

Online slots Canada players must choose smartly and decide on the best colour and multiplier combination for maximum wins.

Playtech’s Rubik’s Cube is a fun, interesting slot that ties in special features in creative ways. It’s a must play for fans of the retro puzzle but is likewise a great experience for those who never touched a real Rubik’s Cube in their life!

Play this online slots Canada game now at SIA Casino and see if you have what it takes to create a winning combination on the colourful reels. 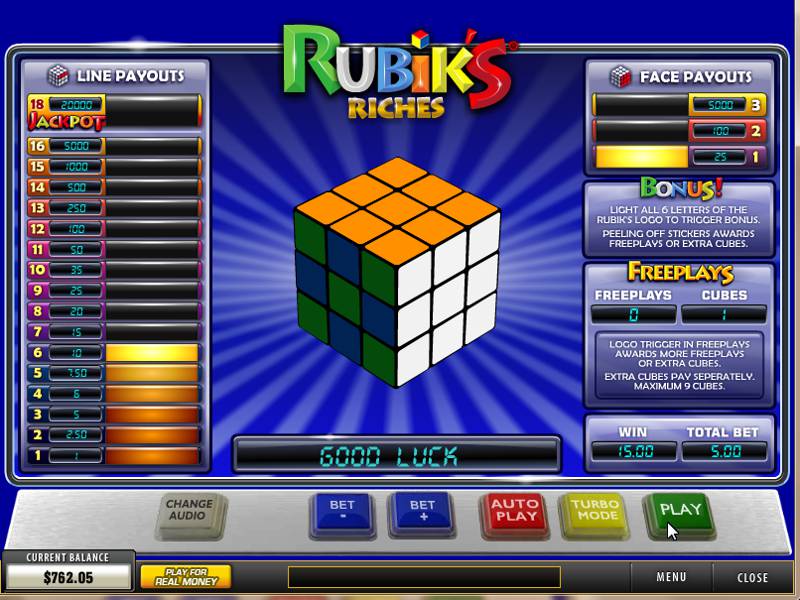