Fill those buns and get ready for a sausage fest with the raunchy new online slots game from Blueprint Gaming. Packed with special features and 6 bonus rounds, Sausage Party™ is not to be missed. It’s for adults only, so open the mind, butter those rolls and let the festivities begin.

Any online slots player who is familiar with games from Blueprint Gaming, like Ted™ and Beavis and Butt-Head™, will know that, even though these games might be inappropriate and offensive to some, they are fun to play and come with loads of bonus features, more than online slots from other software providers. The latest release from Blueprint Gaming, Sausage Party™, is no exception. This 5-reel, 20-payline online slots game is based on the adult animated comedy from 2016, and is packed with no less than 6 modifiers and 6 different bonus rounds. With that said, it’s time to fill those buns and see what sausage fest awaits.

A Sausage Fest of Bonus Features

Sausage Party ™ is an online slots game from Blueprint Gaming, and has 5 reels and 20 paylines. As the game is based on the popular movie, players can expect to find the characters from the animation as the main symbols on the reels of the game. But it’s the bonus features that really set this online slots game apart from others.

For starters, there are 6 game modifiers that work as follows:

There are also two extra modifiers that could appear at any time after a non-winning spin, to rearrange the symbols for a possible win.

Then there are the six bonus games which can be triggered by landing at least 3 Scatters during a single spin. One of the following bonuses can be awarded:

Start the Party at Fun Casino

While Sausage Party™ may not be an online slots game for everyone, it certainly makes for great entertainment and is filled with exciting bonus features. And players that enjoy these type of slots, can also keep an eye out for similar ones from Blueprint Gaming, such as the aforementioned Ted™ and Beavis and Butt-Head™. These online slots, together with Sausage Party™, can be played at any online casino featuring games from Blueprint Gaming, however, we cannot think of a more appropriate destination than Fun Casino – the name really says it all. 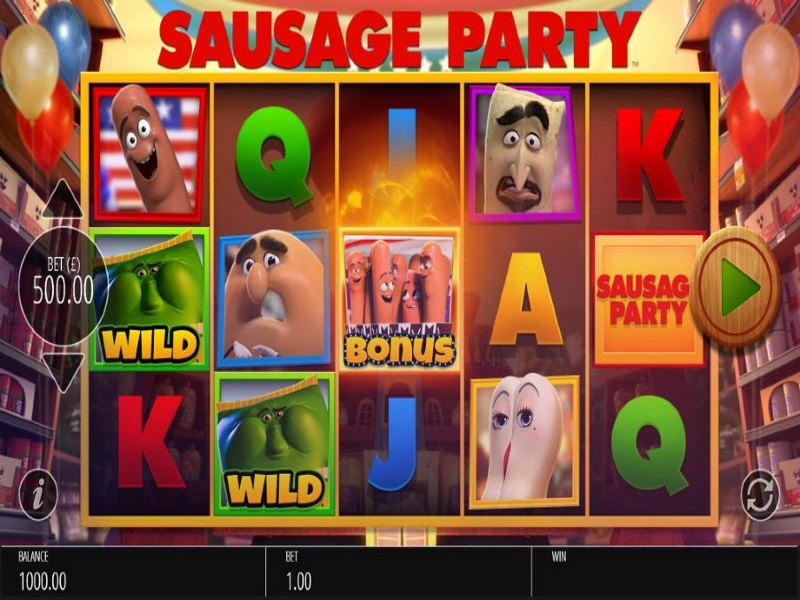