Play’n GO are no strangers when it comes to developing incredibly immersive and captivating online slots. Ever at the forefront of titles that are entertaining, exciting and full of winning potential, it only stands to reason that their Sea Hunter online slot is one of the best choices in terms of playing online slots for real money. At first glance, the game may seem rather simplistic, given its somewhat old-school 3x3 reel mechanic, but it’s everything but. With an apt soundtrack, delightful animations and cool design, the game is an absolute hit, and is available to play at Mr Green Casino, where new members can look forward to a generous welcome bonus upon sign-up, as well as free spins. So, no more dangling toes in the water, let’s dive right in and see what’s in store.

Despite being a video slot, Sea Hunter features a 3x3 grid and only 5 paylines. The minimum bet is 0.05 credits, while the max is a noble 100. The symbols you’ll encounter across the reels include some really wonderfully designed sea creatures, including an orca, jellyfish, octopus, porcupine fish, manta ray, angelfish, turtle and clownfish. The lack of card suits in this video slot to denote the lower-value symbols really adds to the immersive quality of the game. The golden mine symbol is the wild, and substitutes for all other symbols.

Now, probably the most fun aspect of Sea Hunter is the presence of 2 cannons, which charge up depending on the number of consecutive wins you hit across the reels, awarding you differently depending on how many wins you hit in a row. Below is a summary of these awards:

The above feature really adds a refreshing element of change to this online slots game, and more than makes up for the lack of a Scatter symbol. You can use the Autoplay feature to let the reels spin themselves, and for once we would actually suggest this, so that you can watch in anticipation as those cannons charge up and churn out some incredible wins.

Sea Hunter is, hands down, an exceptional choice when it comes to playing online slots for real money. The soundtrack is fitting, and the animations are absolutely enchanting. All the while, in the background, a deep sea scene complete with sunken treasure and little shoals of fish swimming by make for an immersive experience. The game is available to play at Mr Green Casino, where new members can look forward to a hearty bonus PLUS free spins upon registration. Dive on in today! 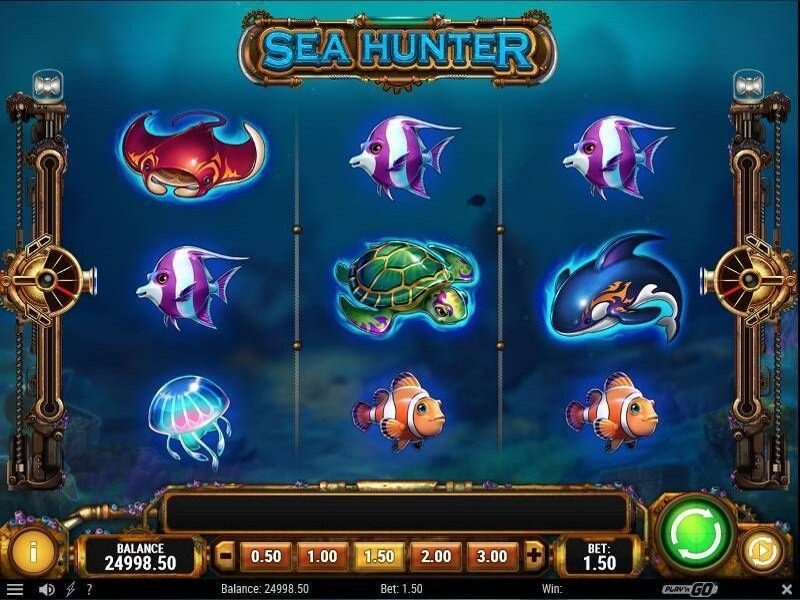