Shoot! Online Video Slots spells good news to both PC and smartphone users because this game of classic footie is available as an online and mobile casino game. If you haven’t heard of ‘Shoot!’ yet, don’t feel too bad. As one of the many Microgaming titles released year in and year out, month in and month out in fact, ‘Shoot!’ was not one off their most popular ones and this is a pity because it is an A-class game for a number of reasons. Firstly it’s going to give you a massive dose of nostalgia which is going to make you feel great, and then on top of that it’s going to come over the top with a slew of some really cool features.

Why this soccer-infused game hasn’t received as much kudos as other footie-themed ones like Soccer Safari or World cup Mania is beyond me, although it could have to do with the fact that the game is based on a really old British publication called Shoot! that enjoyed  a wide readership in the 70s, 80 and 90s. Anyway, if you’re ready to shoot and score big wins on a game like this, then I’m going to throw my lot on with River Belle.

Why the River Belle?

Good question! Why the River Belle Online Casino? It’s old, it looks old, the theme is clearly for old fogies – why should you go there, let along enjoy a game modelled on an old and expired magazine? There is nothing wrong with playing at an old internet casino! In fact, the older they are, the better. In this industry an old casino signifies success. Trust me, the bad guys (do a Google search for rogue casinos) don’t last and always end up in the rogue gallery of online casino operators. River Belle has been doing its thing since 1997, and not a single hiccup.

Yes, it’s still got the whole riverboat theme going but they have updated their website, so while the riverboat idea is still strong, the website looks modern and up to date. Plus they’re smartphone compliant – mobile casino players take note! And on top of this, they have a new C$800 welcome bonus.

If there’s one thing that Shoot! Video Slots does very well, it’s that it evokes a great sense of nostalgia. Microgaming have done some serious research and the results show on Shoot’s 5 reels, 3 rows and 50 paylines. The artwork mimics all the attributes of the original magazine that saw great success thanks to quality articles and guest writing on behalf of notable players. The entire look and feel of the game comes straight out of the 1970s and this is something that gave me a great degree of delight. Then of course there’s the way the game plays and its features.

I need to commend Shoot! Video Slots further for the way Microgaming has infused the whole 70’s soccer theme with its usual slew of win-enhancing features. Shoot comes with Wild and Scatter symbols as well as the Shoot Bonus which is activated by three or more Scatter symbols, and can in turn lead to three exciting outcomes. At first you’ll need to combine cards of your favourite footie heroes of years gone by. You get four picks in total and the outcomes can either give you cold, hard cash, award you with between 10 and 35 Free Spins or take you into the magazine Bonus where you’ll need to click to win.

All in all it’s bang-for-buck entertainment. Shoot! might demand that you play for a while before getting into these bits of the game but your time can be well worth it! 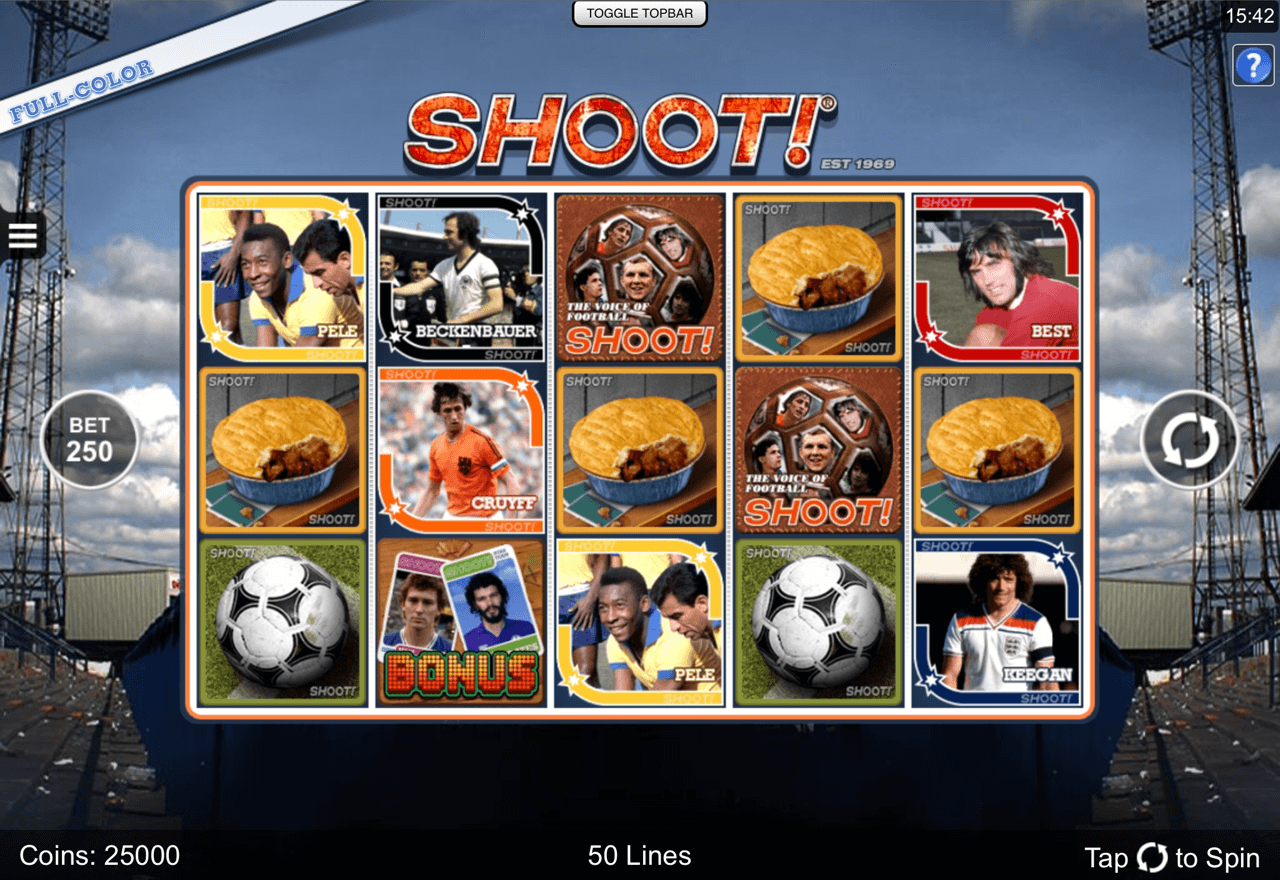