Join the web-slinger as he battles Doctor Octopus in this exciting Marvel slot game. Spin – or should I say swing – your way to a 3-level jackpot and an exciting bonus round. Play up to 25 lines on 5 reels and wager up to 5.00 per lines as you try to win up to 5, 000 times your bet.

Created by Playtech, this Marvel comic themed slots game is another smash hit and you’ll have to tackle the Green Goblin in order to win big. As the reels spin you’ll get to see Spiderman save the day, and rescue his girlfriend, Mary Jane from the clutches of evil. Gorgeous graphics, a scintillating soundtrack and state of the art animations make Spider-man well worth playing, and if you weren’t a fan of this web-flinging super hero, you will be after a few spins!

There are plenty of ways to win big in Spider-man and stopping the Green Goblin in his tracks will see you claim a prize of up to 1,000 coins, whilst rescuing Mary Jane will see you rewarded with up to 300 coins. Clearing skyscrapers can result in a 200 coins win, and helping Spiderman hide behind his alias of Peter Parker will see you claim 150 coins.

During the base game the Wild and Scatter symbols can also give your winnings a boost. Spider-man is the wild symbol doubling payouts when it substitutes to make a winning combination and the Spider-man Revelations Logo is the scatter symbol: the revelations logo will trigger the bonus game on the second screen. If you’re lucky enough to line up 5 Wilds on an enabled payline you’ll win a jackpot payout of a whopping 10,000 coins!

The animations are related to the themes and are displayed by the main symbols when a winning combination occurs. For example, watch as Spider-man jumps on top of a train to try and save the hostages captured by Doctor Octopus (displayed by Spider-man symbol) or as he leaps from the top of the sky scraper (displayed by Scatter symbol).

The conflict reaches a climax when three or more Scatted logos appear and the Doctor Octopus feature is triggered. Doctor Octopus appears on top of a train and throws a passenger at Spider-man which then displays the number of free games and multiplier.

Spider-man is one of the many popular Playtech slots games that form part of the incredible Marvel Jackpot Network. There are a total of 4 Progressive Jackpots up for grabs, and if you’re lucky you could claim the Power, Extra Power, Super Power or Ultimate Power progressive jackpot when you least expect it! The jackpots are triggered randomly with no matching symbols are required. The size of your wager is the determining factor for winning a jackpot: the greater the bet the greater your chance of winning the jackpot.

This Marvel slot game must be played – even if you’re not a Spider-man fan – because of the fabulous graphics and sound, and the exciting game play. Join Casino.com now and let Spider-man spin your way to slots jackpot fortune! 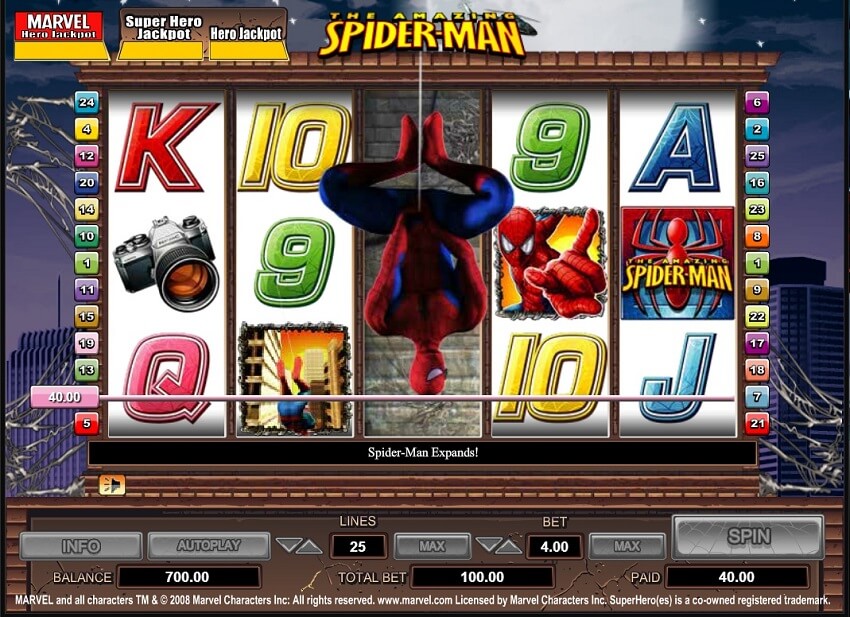