Irish themes seem to have a firm following among gamers and this is why Playtech’s Spud O’Reilly is such a welcomed edition to the exciting world of online casinos, mobile casinos included. This game does however have somewhat of a departure when it comes to the actual storyline. Usually Irish themed casino games have leaned towards the fantasy side of things dealing with leprechauns and fairies.

With Spud O’Reilly Playtech have chosen a more rustic theme to espouse the entertainment value of the game, as well as its winning features. Spud O’Reilly comes with some pretty decent winning features and it’s safe to say that Canadian players who try this one will extract value from it. As it’s a Playtech powered game, you would need to play it at a Playtech powered establishment such as Casino.com.

I need to say something – we’re not here to shamelessly punt online casinos. When we elect to promote a casino, we do so knowing that we’ve checked them out and that the establishment under review is worthy of your time and your dollars. Casino.com is one of the many reputable online casinos we promote and for a number of reasons. First of all, it’s powered by Playtech, a company known since 1999 for quality games – games which extend into the mobile casino stratosphere as well. More recently the company started making live dealer casino games as well. It’s not often that a casino software company takes it upon itself to make live dealer games as well – that’s a game that belongs to the younger companies.

However, such is the might of Playtech that they’ve been able to make their own line-up of live dealer games, something that requires studios from which to broadcast as well as man power. With the power of Playtech Casino.com offers more than 300 games in total, live casino games, mobile casino games and a pretty big deposit bonus sitting at C$3 200.

Spud O’Reilly Video Slots is a multi-platform game, meaning it’s designed for play on PC’s, smartphones and tablets. If portable gambling is your thing, then as a mobile casino game Spud O’Reilly will deliver its playful imagery and win-enhancing features on 5 reels, 3 rows and 20 paylines across the screen of your smartphone. This game provides some very likeable benefits, mainly through its Scatter, Wild and Bonus symbols. It also comes with some great player interaction attributes and this makes Spud O’Reilly more than just a slots game that requires that you simply spin its reels.

Spud O’Reilly’s story pans out on a luscious farm where Spud farms with sheep, with the main intent of shearing their wool to expose large sums of money to you, the player. Spud is aided in his quest for wool and cash by a Wild, a Scatter and a Bonus symbol, each with their own unique cash-carrying abilities. Spud is the Wild symbol and also the strongest one. If you spin until five Wilds land in a row on an active payline you will win 10 000 coins. Spud will also replace all other symbols except for the Bonus and Scatter symbols to create bigger, better and stronger winning combinations. The Scatter symbol is realised by a four leaf clover and when three or more land on the reels you can win up to 10 Free Spins.

All wins achieved during the Free Spins feature will be upped by a 3x Multiplier, making this feature quite a potent addition to the game. If you’re looking forward to some sheep-shearing action then you’ll want to keep a keen eye out for the Bonus symbol represented by the friendly looking sheep. Get three or more on an active payline and you’ll be taken to an open field populated by a bunch of sheep. The amount of sheep that trigger this feature will determine the amount that you can have Spud sheer to expose some hefty cash prizes. 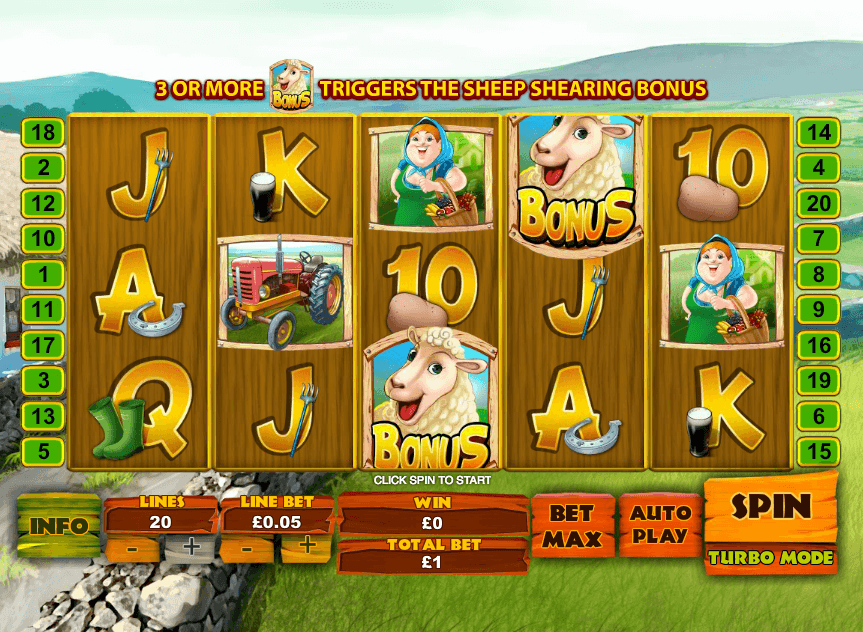