He goes by many names – the man of steel, Kal-El, Nightwing and on at least one or two occasions his been called Flame Bird, but in this online video slots game he’s The Last Son of Krypton. Superman: The Last Son of Krypton expands on the original released a few years ago by Cryptologic. Subsequently the rights to the game were sold to Amaya Gaming. This is an impressive game to look at. The makers have spent a lot of time meticulously developing the game and injecting it with authentic DC Comic flavour.

All the main ingredients are in the game that pays homage to the world’s greatest superhero - action and great win-enhancing features. Interest in Superman has definitely risen in the last few years thanks to the current films that have been released – namely Man of Steel and Batman v Superman: Dawn of Justice. With this video slots game available for mobile casino players too, the roots are strongly entrenched in the comic book mythology.

The Last Son of Krypton: Look and Feel

Superman: The Last Son of Krypton is an action-packed game, designed to give players a proper man of steel experience in scale and scope. A desolated Metropolis provides the background to the game’s 5 reels, 3 rows and 25 paylines of action and multiple win-enhancing features provided by Clark Kent, Superman, Lois Lane and Superman’s arch enemy – Lex Luther. As is often the case with an online video slots game, the real action takes place in the Free Spins feature.

Superman: The Last Son of Krypton actually has the ability to pack quite a punch in terms of winning features and win-enhancing features. First up is Sups himself as the Wild symbol who usurps all the other symbols to help you punch your way to bigger wins. His alter ego, Clark Kent, is along for the ride as a Morphing Wild - watch Cark turn into the man of steel to flex more wins your way! The Free Spin games in this game work quite differently and are dependent on reels 1 and 5. For instance when Superman appears on reel 1 and Lois Lane on reel 5, you’ll get the Lois Lane Wild Hearts Feature. The scenery will change and you’ll see Miss Lane sitting at her desk with a dreamy look on her face as she pines for Superman. While she does this you’ll see her hearts move from her into the reels while getting between 10 and 20 free spins with multipliers as high as 8x.

If Superman appears on reel 1 and Lex Luther on Reel 5 you’ll kick off the Lex Luther Frozen Wild Free Spins Feature. In this Feature Superman will appear on the left hand side of the reels while Lex will hover on the right. You’ll receive up to 10 free spins and during the feature Superman will freeze the reels, turning them into frozen wilds while Lex will attempt to shatter the ice. This feature does have the ability to dish out up to 100x your bet. 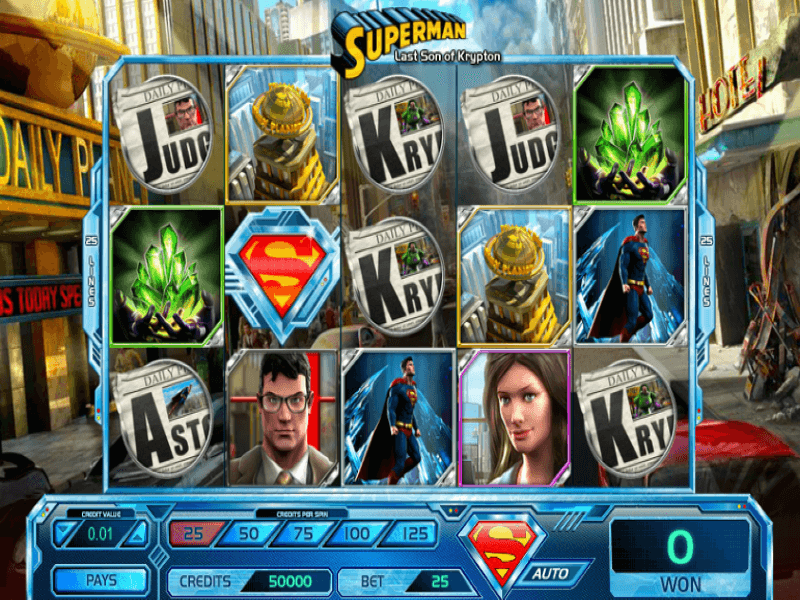