If ever there was a teddy bear that broke the mould, it was Ted™. The foul-mouthed character from the movie franchise has also been immortalised as the theme for a thrills-a-minute slots game, which goes by his name. Love him or hate him, you’ll find him unwaveringly entertaining in his antics on the reels of this animation-rich online slots creation from Blueprint Gaming. Along with the bear’s many memorable player interactions, they can immerse themselves in the slots’ endless list of engaging and rewarding features. Complete with a catchy soundtrack and Ted’s running commentary, you’ll feel like you’ve stepped into his world, the moment you start to spin.

The backdrop for this online slots game, depicting Ted’s room in the basement, could very well have been the movie set. With the game screen as his television, Ted makes himself comfortable on the couch, remote in hand. When the slot’s 5 reels start spinning, players can look forward to winning symbol combinations appearing across a possible 20 paylines. The symbols, holding the key to payouts, include J, Q, K and A card icons, a 6-pack of beer, a duck, a bong, Ted’s girlfriend, a Ted™ logo, Wild teddy and Thunder Buddies Bonus symbol. And you’d want to see the online slot’s Wild as it has the power to substitute for all symbols except the Bonus icon, plus it’s worth up to x500.

Ted’s bonus features are anything but ordinary. And the same thing can be said of the rewards it can unlock. To cash in on 1 of 5 possible bonuses, three of the Thunder Buddies Bonus symbols need to appear on the reels. This will launch one of the following bonus features: The Bar Crawl Bonus, colourful Super Mart Free Spins, enticing Flash Free Spins, an engaging Wheel of Fortune Bonus or Big Money Bonus. Each of these entertaining bonuses features unique animations, mechanics and prizes, including Wild Rewards, Extra Wilds, Mystery Cash Prizes, Multipliers and Free Spins. But that’s not all, to boost your winning chances, 1 of 6 Bonus Modifiers can be randomly triggered. These include a Psychedelic Super Spin, Colossal Spin or Boost, a Beer Shuffle feature, Laser Gun Infectious Wilds and a TV Streak feature – all powerful enough to wake a snoozing Ted from his slumber on the couch. Making these modifiers even more entertaining, are Ted’s reactions, which include firing off his laser gun, smoking his hookah pipe, battling with his remote and having his beer explode over the game screen. Aside from all these rewarding features and modifiers, the Ted™ slots game still offers a Gamble round with a twist, allowing you to gather risk features to boost your winnings.

With so many thrilling slots features on offer, you might find that Ted™ takes a little longer to load, but trust us, it’s worth the wait. Once it’s up and running, you’ll find it easy to select your bet sizes. Plus, you’ll enjoy minimal clutter at the bottom of the screen, which displays only your balance, bet size and win amounts. For access to other info, simply click or tap on the hamburger menu in the circle to the bottom left of the screen.

If you haven’t yet found a casino hosting this online slots game, we suggest you give Casimba Casino a go. With more than 500 thrilling games, supported by software from 20+ software companies in its line-up, you’ll have plenty of other gaming choices at your fingertips, apart from Ted™. What’s more, it also promises a 200% match bonus to all new players, credited on their first deposit. Plus, with safe and easy banking as part of their player promise, you can play here with complete peace of mind 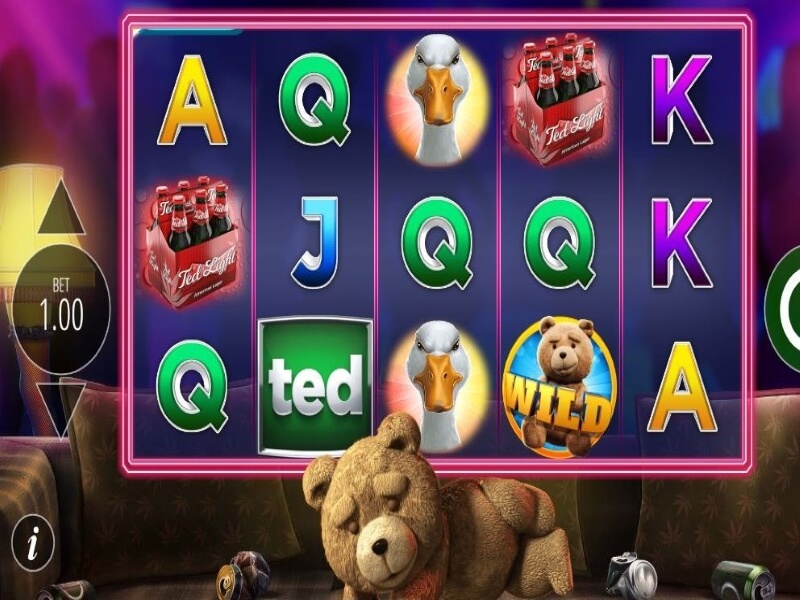