One of DC Comics greatest heroes has finally gotten his own game! The Flash Online Video Slots will zip on to your screen to offer speedy rewards and a great time at the Play OJO Casino – the establishment at which you can enjoy this existing game. While the DC characters have always been popular, interest is surging and this can be attributed to the current slew of movies recently released as well as the TV shows now doing the rounds. The Flash has his own TV show, has moved onto the big screen thanks to his inclusion in the Justice League Movie, has his own standalone movie due out in 2018 and now has his very own video slots game. The Flash Video slots is actually the product of three software companies – Novomatic, NextGen and NYX Gaming.

Novomatic made the original, NextGen bought it and did a little tinkering and then NextGen was acquired by NYX Gaming who are responsible for the game’s availability of a mobile slots title. With all the future plans for the franchise of the Flash, we can definitely expect more casino games based on the fastest man in the world.

The Flash is at Play OJO Casino

The Flash Video Slots game is ready and waiting for you at Play OJO, a European-styled establishment that stocks games made by big names like Betsoft, Amaya, NextGen, NYX and Thunderkick. What does it all mean? That you’ve got access to hundreds of online casino games and that can only mean more chances to win. Like many of today’s operators, Play OJO offers a mobile casino capable of being enjoyed on a wide range of mobile devices. New players have quite a spread waiting on them in the form of 2 special deposit bonuses.

The Flash Online Video Slots carries the handiwork of three companies, so players can expect a rather refined game. Each company is respected in its own right, making this game a rather polished product. In terms of visual appeal, The Flash goes directly to the source – the comic books to offer up images taken page for page. Flash will zip across the 5 reels, 3 rows and 50 paylines accompanied by three of his biggest villains. Everything gets kicked off by a video done in some snazzy computer graphics and rendered in 3D animation. The Flash brings his speedy win-enhancing features to you in the form of his Wild and Scatter symbols.

Bonus Features of The Flash

he Flash Video Slots comes with a Wild and Scatter symbol – it’s most potent win-enhancing features. As the Wild, the Flash himself will speed across the reels to randomly turn symbols Wild. All wins completed by the Flash’s Wild symbol will be tripled. This game also sports a Bonus Bet feature which when activated can give you larger payouts. The Bonus Bet will need you to wager more but the returns are matched should you strike it lucky. For instance, with the aid of the Bonus Bet, the Flash, instead of tripling your bet, will multiply it by 5. The most lucrative part of this game is the Rogue Gallery Free Spins Feature entered into once you get three or more Scatter symbols (the Flash’s emblem) across the reels.

Once you’re in this feature you’ll have a choice of one of the Flash’s villains to choose from. Each villain brings something different to the party, so choose wisely. 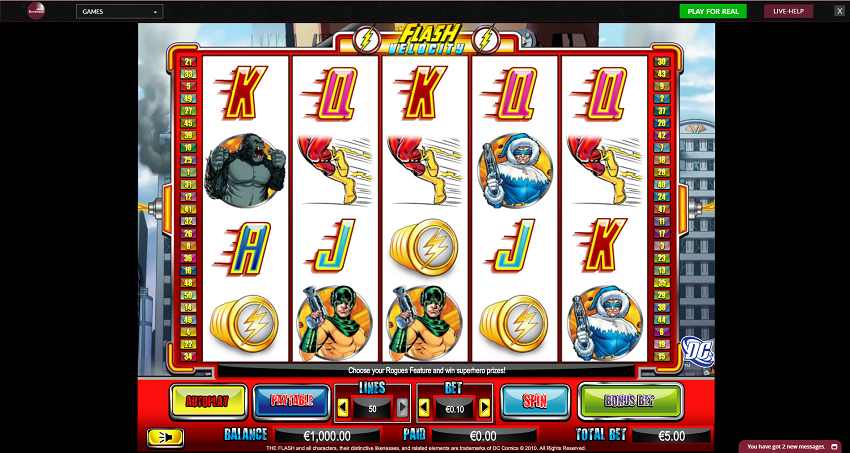