The highly anticipated sequel to the inspiring Video Slot, Thunderstruck, is available for you win with right now! Thor, the mighty God of Thunder has returned to guide you through Asgard and win thunderous jackpots once more.

You’ll join a cast of familiar mythological Norse characters in a reel spinning adventure that’s bigger and better than ever before! Thunderstruck has been a smash hit for over a decade, so it’s only natural that the slots sequel is equally well received, and a Canadian player favourite!

Thunderstruck II has done away with the traditional slot game setup and instead makes use of Microgaming’s 243 Ways to Win format. This means that you don’t have to line up symbols on active paylines, you simply have to land them adjacent to one another in order for them to payout.

With 243 chances to win this game is played on 5 Reels and has NO Paylines. Stacked with features like Wilds, Scatters, FOUR Bonus features, Rolling Table, Expanding Wilds and a superb Gold Paytable feature, Thunderstruck II really gives you more chances to win than ever before.

Thunderstruck II is a slots game that’s packed full of bonus features and you’ll find that there are so many ways to give your winnings a boost.

This slots bonus round is the pinnacle of the game and it’s also the most rewarding level you can reach!

Strike it Lucky with Thunderstruck II

Thunderstruck II certainly delivers and it’s a fitting sequel to a game that made slots history over a 10 years ago!

The King of the Gods gives you 20 Free Spins with a Wild Raven feature which can randomly turn symbols into 2X or 3X multipliers worth 6X if both ravens appear in the Odin Bonus which is available after 10 bonus triggers.

The God of Thunder awards 25 free spins with Rolling Reels where each consecutive win increases the multiplier up to X5 in the Thor Bonus which is available after 15 bonus triggers.

Are you ready to win fantastical jackpots? If so, you need to discover the adventure with the hammer wielding Thor and the Norse God’s in Thunderstruck II, today! 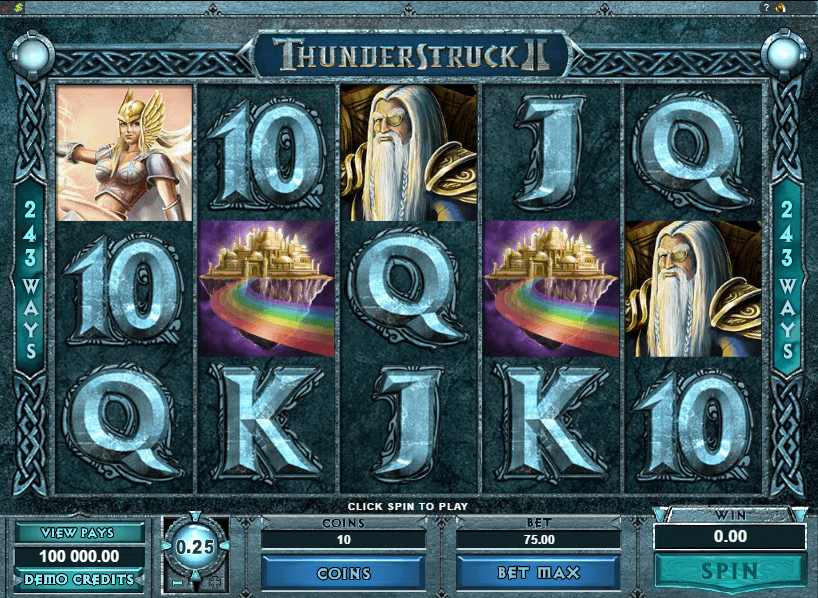