The True Sheriff is a video slots game created by Betsoft that lives up to the company’s reputation for world-class features, graphics and animations. The Slots3 title uses Betsoft’s trademark Cubed technology, which breaks new ground in terms of 3D action. We are happy to recommend it to players in Canada, and if you sign up at Casino Room you can join in the fun right now.

The True Sheriff is set in the Wild West, with a frontier town in the background on the screen. The reels themselves are encased in typical wooden structure, and the Sheriff in question leans against the side and performs different antics during gameplay.

Jaunty background music, which would not be out of place in any Old West-inspired film, helps to engage you in this online slots extravaganza even more. Lower-value icons are the usual playing cards, while higher-value symbols include a barmaid who looks like she works in the local saloon, a quintessential bad guy, a Sheriff’s assistant and, of course, the True Sheriff himself.

There are 5 reels, 3 rows and up to 30 paylines in this slots game, and the theoretical Return to Player Percentage is a very impressive 97.03%. You’ll want to maximise your winning potential, and the AutoPlay feature allows you to do just that. With this, you get to keep the reels turning by themselves, even when you are exceptionally busy.

You won’t have as much fun as you would by spinning on your own, but you won’t miss out on any payouts either. With a betting range of C$0.6 to C$150 per spin, everyone can afford to try for the jackpot of 6000x your total stake.

Special Features Up the Action

As well as their rewarding basic gameplay, Betsoft’s online slots usually offer a slew of special features to help you win even more. The True Sheriff is no exception, with Wild and Scatter Symbols in the form of pistols and badges respectively.

When the pistol is seen anywhere on Reel 3, the Sheriff will start shooting at the screen, making random symbols Wild. These Wilds can substitute for almost any other icon, so they will really boost your payout potential.

The Scatter is the only symbol that the Wild can’t stand in for, and when 3 or more badges land anywhere on the screen at the same time, you’ll get 10 to 15 Free Spins. During the Free Spins, you’ll also notice a special counter for each of the slots reels. This tracks how often the badges are seen, and award a bonus amount at the end of the round.

As well as the typical Wild and Scatter Symbols, The True Sheriff also features Showdown Bonus. This is triggered by landing a pistol between the faces of the Sheriff and the bad guy on Reels 1 to 3. This is a 5-tier heads-or-tails game, and requires you to predict the outcome of a coin flip.

Every time you are right, you get to go up another level. You’re allowed two incorrect guesses, and the round ends when you reach the top or guess wrong for the third time. At that point, you will be paid out according to the level you are on.

The Double Up Gamble Feature gives you the option of trying to increase your money after every win. You need to predict the colour of a randomly drawn playing card, and if you’re right, your payout is doubled. If you’re wrong, you lose everything, which adds a fitting sense of gambling to this Wild West slots game! 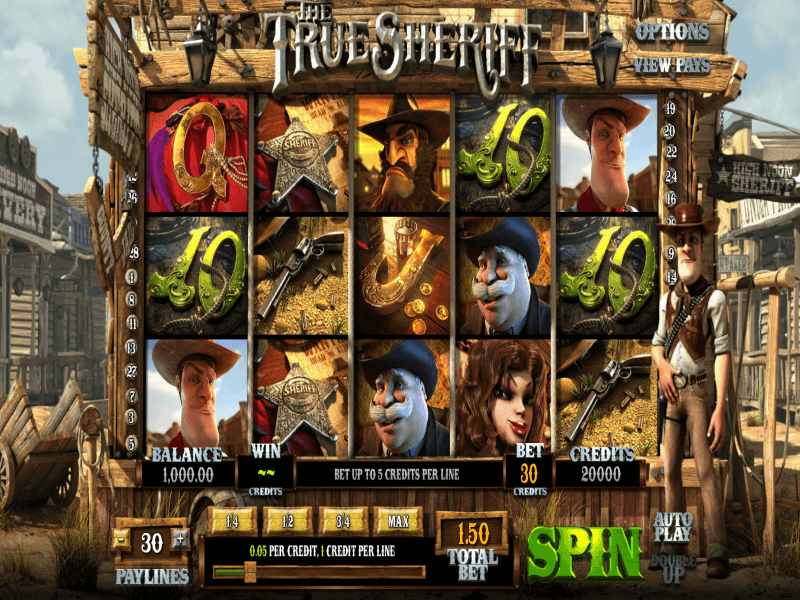