Valley of the Gods Slots

Egyptian-themed slots games are hardly a new idea. In a way, that actually makes them a lot more challenging for developers, since our standards and expectations for them are generally very high. Yggdrasil Gaming, which is rapidly making a name for itself as a very innovative developer, certainly gets it right with Valley of the Gods.

Play in a Beautiful Temple

The 5 reels and 5 rows are set in a temple that is flanked by a stone-carved Egyptian god on either side, while pyramids are visible in the distance. Epic music continues the sense of exploring and adventure, while the images on the reels are all rendered in a typical 2D, Egyptian style.

Higher-value icons are beautiful images of Egyptian gods, while stylised, hieroglyphic-like symbols complete the line-up. Like many new online slots, this one does away with conventional paylines. Instead, you are rewarded whenever 3 or more pre-specified icons are seen on adjacent reels, that run from left to right.

The symbols can be in any position, rather than being required to line up in specific patterns. This gives you no less than 3125 ways to win on every spin, creating a very impressive theoretical Return to Player percentage of 96.2%.

The top jackpot is 500x whatever you bet, which could be as little as 0.1 or as much as 100 on every round of this slots game. To maximise your chances of winning, you can opt to activate the AutoPlay function when you are particularly busy. This will keep the reels turning automatically, without you having to do anything.

Yggdrasil's creative flair is clearly seen in the way they've used these sacred beetles. To start with, these golden blockers will cover 12 of the reel positions. More will be removed with every win, but if you have a non-successful spin everything will be reset and you'll have to start again. Clearing all the blockers will trigger the Free Spins Round.

The Free Spins Round in Valley of the Gods is a lot more involved than in many other Video slots, which makes it so much more fun to play. The statues on either side of the reels become counters, one for lives and one for multipliers.

To start off, you are given one extra life. As you spin, the gems that land on the reels will be added to one of the two counters. Any spin where you don't win anything will deduct a life, and the round is over when you run out. At this point, your wins will be subject to whatever your multiplier amount is, and you'll be returned to the base game, with a new set of 12 blockers in position.

Try it at Cashmio

If you're feeling ready to take your video slots experiences to the next level, it's time to try Valley of the Gods! We recommend taking advantage of the great bonuses and service at Cashmio, and playing at this casino today. 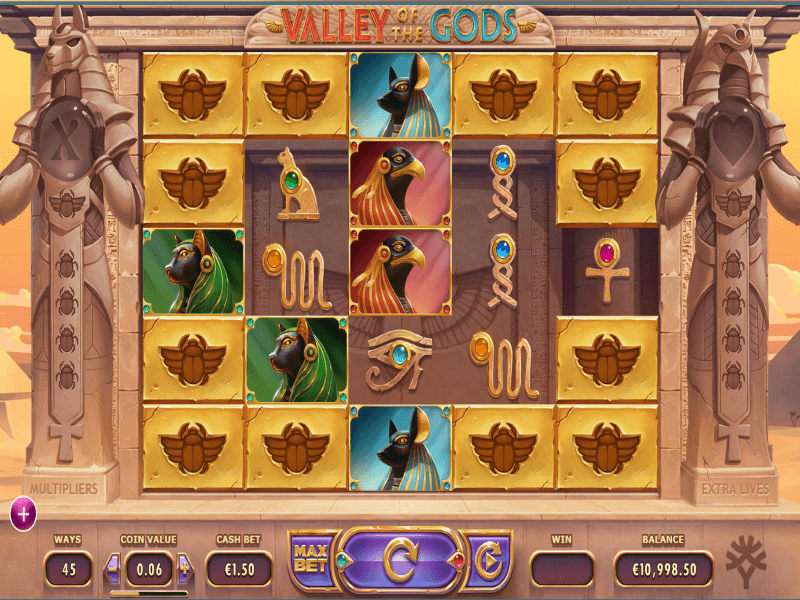