Vampires and werewolves have inhabited the darkest caverns of our imaginations for centuries. From ghoulish fiends and tragic villains, to romanticised heroes/heroines and even comedic fodder, writers, film-makers, artists and graphic novelists are continuously reinventing these characters for modern audiences, with no sign of their popularity abating. Enter Amaya Gaming, one of the most innovative casino game software providers around, and their eerie new slots creation, Vampires vs Werewolves.

While most online slots games in the horror genre tend to portray scary characters in a lighter cartoon style, Vampires vs Werewolves has gone for a far more serious and thrilling representation, with the startling graphics and spooky soundtrack likely to send the odd chill down your spine. Dare to read further – we have lots to discuss.

Played across 5 reels and 20 paylines, Vampires vs Werewolves is a stunning online slots creation from Amaya Gaming: who are renowned for delivering games with excellent visuals, animations, sound effects, music, gameplay, navigation and bonus features. The reels are set against a backdrop of an eerily misty shroud, which in turn sets the scene for a ghoulish plot.

The symbols all naturally resonate with the game’s theme, and include a variety of vampire and werewolf-related icons, including a Crucifix, Bible, Gun with Silver Bullets, Garlic, Dagger, Wooden Stake, and of course, the Vampire and the Werewolf themselves. The Wild symbol is the Damsel, which has the ability to substitute for other symbols to complete winning formations. The only symbols she cannot replace are the Vampire, the Werewolf and the Vampires vs Werewolves game logo. What’s more, if you land 5 Damsel Wilds, you’ll score the max symbol payout of 37 000 coins.

If the Vampire symbol appears on the first reel and the Werewolf symbol appears on the fifth reel at the same time, then you will activate the potentially lucrative Clash Scatter symbol. For every Crucifix symbol that you land during this feature, you will score an extra bonus win. If two, three or four Vampires vs Werewolves logo symbols appear simultaneously, then a second screen will open up so that you can pick a character for the bonus round. Typically, this bonus feature will get activated a few times, which means you’ll get the chance to bet on each of the characters.

The bonus feature resembles a game of Snakes and Ladders. Take note that while you’re playing, you should watch out for any death traps that might occur along the way. You can also get Lifesavers, which would be the Garlic if you chose Werewolf, and the Gun with Silver Bullets if you chose the Vampire – these allow you to continue playing.

Vampires vs Werewolves also has an AutoPlay feature, but it is such an exciting slots game to play, that it’s unlikely you’ll use it.

Play Werewolves vs Vampires at PlayMillion

Vampires vs Werewolves is a fantastically creepy and fun addition to the horror genre of online slots games. Powered by Amaya Gaming, it’s visually arresting, with great sound effects and bonus features that add to its appeal. What’s more, Werewolves vs Vampires can be played at one of the leading online casinos around, PlayMillion. It’s renowned for delivering hundreds of quality online slots and other casino games, as well as lucrative bonus offers, a generous loyalty rewards programme, exciting promotions, trusted banking mechanisms, around-the-clock customer support, and more.

Simply register an account, claim your welcome bonus, start playing Vampires vs Werewolves, and see for yourself if PlayMillion is worth your time. As for the slots game itself, you’re in for a treat as it’s a really good creep fest – enjoy! 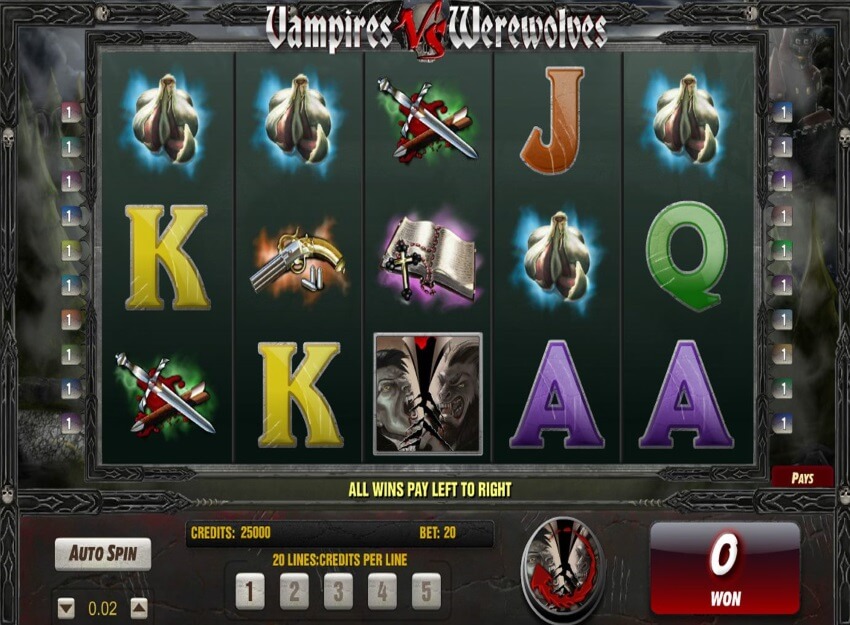