If you’re a fan of Nordic mythology and the Vikings, then you’re going to love Viking Runecraft, an excellent online slot by leading software provider, Play ‘n GO. Played out on a grid of 7 reels and 7 paylines, Viking Runecraft is a visually arresting game that comes with thrilling bonus features, a non-progressive jackpot of 10 000 coins, and so much more. Let’s take a look!

Viking Runecraft features 4 powerful Norse gods – Odin, Thor, Heimdall and Freya – while the low value symbols include the Axe, Runes, Necklace, Helm and Hammer. Each of the gods has a particular pattern, which needs to be completed by landing a winning combination. Once completed, the pattern will reveal which god it is, allowing you to progress onto the next level to complete another pattern and reveal the next god…and so on.

The game is loads of fun to play, but can get fairly complicated to explain as there are quite a few features, like Ragnarök, Free Spins, Charge of Destruction, Valhalla Wheel, the Gift of the Gods, and more.

The Ragnarök bonus rewards you with 1 Free Spin and a Multiplier of up to 15x. Take note that on the left side of the reels is a meter, which gets charged each time you land a winning spin. As gameplay progresses, the 4 Charge of Destruction bars are lit up, with each one progressively leading to potentially big rewards. Here’s how it works…

During the main game you can also activate the Gift of the Gods round, which is initiated if you hit a few non-winning spins in a row. Basically, the God of Thunder will gift you with up to 9 symbols that can become Wild, while the Gods of Wisdom, Beauty and Guarding will also subsequently reward you with Wild wins. The fun doesn’t stop there thanks to the Valhalla Wheel bonus round, which is activated when 1 Rune Stone symbol combo is added. Thereafter, a wheel is revealed, which you must spin to collect more runes in order to win.

Viking Runecraft offers terrific entertainment. Powered by software provider, Play ‘n GO, who are renowned for delivering games that are innovative, visually appealing and rewarding, Viking Runecraft is one of hundreds of spectacular creations that include titles like Jade Magician, Prosperity Palace, Aztec Warrior Princess, Bugs Party and Hugo to name just a few. To join in the fun, simply sign up at a Play ‘n GO casino and get rewarded. 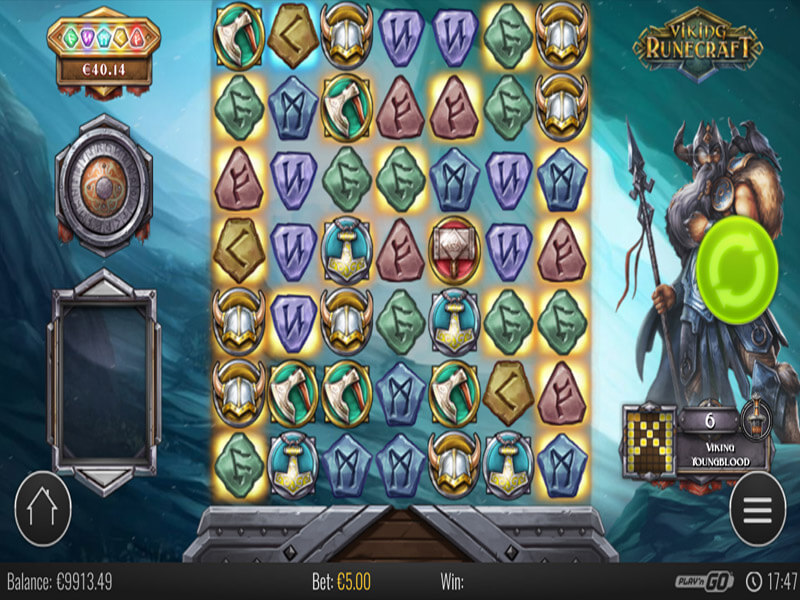