While you can still read the comics and watch Wolverine on the big screen or at home, unfortunately you won’t be able to spin the reels of this online slots game anymore. The Marvel series may have been discontinued, but there’s something even better waiting in the wings. Enter the DC Comics slots games that are action packed and also offer plenty of chances to strike it lucky. Give games like Green Lantern, Batman, Superman Man of Steel, Wonder Woman and Hellboy a whirl and discover what great comic themed entertainment and big wins are waiting for you!

Perhaps the most recognised of the X-Men, Wolverine is a force to be reckoned with, even in Slot form. Claw your way to massive wins in this 5 Reel, 25 Payline Slot, which boasts Wilds, Scatters and an impressive Bonus Feature.

Playtech has released a number of super hero themed slots that all tie in with the Marvel franchise, and Wolverine brings another familiar character to the reels. The game follows the story of the razor fingered Logan and provides plenty of opportunities for players to strike it lucky with every spin!

Fans of the X-Men will recognise Wolverine’s archetypal Symbols – cigars and whiskey, dog tags, combat boots, costume, adamantium claws, his love interest Jean Grey and of course his arch enemy Sabretooth! On the reels you’ll also find a DNA helix, a muscle bound baddie, a fist punching through metal and the traditional 9, 10, J, Q, K and A playing cards. The reels of this super slot are enamelled into an enormous metal door next to which the super hero stands watch.  The graphics are as sharp as his claws and the gameplay as fast and action packed as Weapon X himself.

The special symbols in this video slot machine game are Wolverine as the Wild and there are 2 different Scatter symbols to give your winnings an extra boost. The Wild doesn’t only stand in for all other standard symbols to complete a winning combination, but also appears as Stacked in both the bonus and base games. A syringe of Adamantium is the first Scatter symbol, and the second is Sabertooth.

Help Wolverine in his quest and he’ll help you – in fact if you get 3 or more Wild Wolverine Symbols, you’ll be awarded with a Free Spin.

When 3, 4 or 5 of the Adamantium syringes appear anywhere on the reels you’ll trigger a free spins bonus. During this bonus round the Adamantium Bonus Meter will fill up and depending on how many symbols triggered the feature to start off with, you’ll be rewarded with a Stacked Wild on 1 or more the reels. The greater the number of Scatters you initially landed, the greater the rewards!

Land 3 or more Scatter Sabretooth Symbols and you’ll be launched into the Wolverine vs. Sabretooth Bonus Feature. This pulse pounding battle will let you control the fierce hero in a fight to the finish and you can expect grand rewards after defeating your opponent. Further free spins are up for grabs in this slots bonus round, as are multipliers and cash rewards.

The heroic bonus features don’t stop there, Wolverine is part of the Marvel Progressive Jackpots, so you can aim for the big prizes right here:

The Progressive Jackpot can be triggered at any time, so you could win big on your very first spin! It doesn’t matter whether or not you are an experienced slots player, or brand new to spinning the reels, it could be your lucky day whenever you play Wolverine! Just remember, the more you bet, the bigger your chances are of claiming a life changing Progressive Jackpot win! 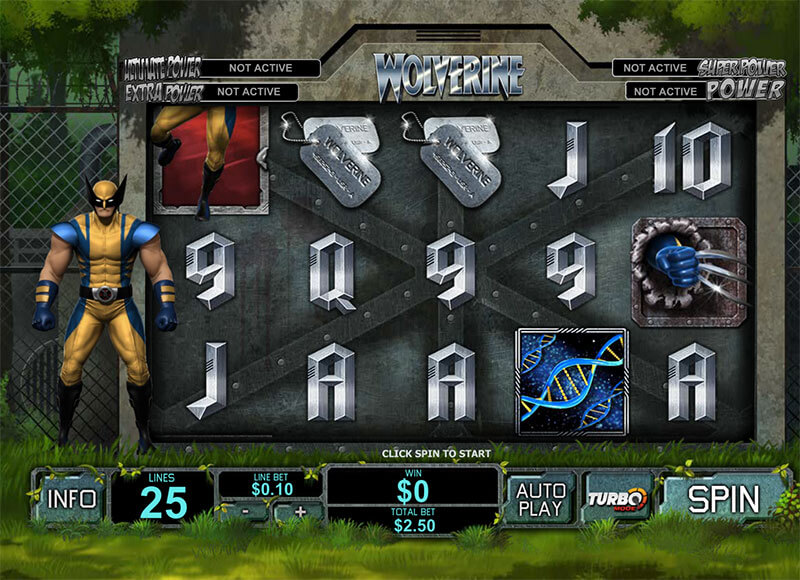