Unfortunately X-Men has X-pired and with all the other Marvel slots in the series, it has been taken offline. This doesn’t mean that you’ll be left with no super hero action and entertainment to enjoy though. DC Comic slots are available in full force, and you can choose from a great selection of incredible titles such as Superman II, Superman Last Son of Krypton, Green Lantern, Batman, Batman & Cat Woman Cash, Medusa and Hellboy. Now that’s what we call X-citing!

Spin up a Storm on this X-cellent Slot featuring some of the best (and most evil) mutants from the Marvel universe. X-Men is a 5 Reel, 25 Payline Slot which showcases impressive graphics, with characters, including my all-time favourite Wolverine, instantly recognisable to fans of both the comic books and the movies.  X-Men is another great Marvel themed slots game from Playtech and from the very first spin you’ll enjoy fast paced fun and the chance to claim a super-hero sized win.

X-Men sticks to the usual Playtech slots setup, but as an added bonus it doesn’t feature any of the traditional playing card symbols. Instead, every symbol on the reels except for the Wild and Scatter is one of the comic’s famous characters. From lowest value up to the highest, you’ll find Juggernaut, Cyclops, Beast and Storm, along with Wolverine, Magento and Professor X - all ready and waiting to help you line up a big win!

The betting range in X-Men is also wide enough to suit all players’ bankrolls and the minimum bet per payline is 0.01, and the maximum 50.00. Up to 1250 coins per spin can be wagered, making X-Men suitable for high rollers too! This slots game can be played for free or real money, but of course it’s in the real money version where you can win big!

The Wild symbol, eye-catching in the official X-Men font, offers steep rewards for hitting 2, 3, 4 or 5, and substitutes for other symbols to make winning combinations, whilst the Scatter is represented by the familiar metallic X logo.

In a twist which I feel reflects the narrative perfectly, you might find yourself caught in the ultimate battle between good and evil by hitting 3 or more Scatter symbols. If triggered, you’ll receive unlimited free Heroes games, versus 8 free Villains games. Beginning in Heroes mode, all the usual villain symbols have been vanquished, aside from an extra Magneto Wild symbol. The games continue indefinitely until Magneto crops up on Reel 3 and unleashes a villainous takeover. The 8 free Villains games run out fast, unless the extra Professor Xavier Wild appears on Reel 3 to save the day and retrigger the Heroes Free games.

Another top feature in my opinion is The X-Feature, which rewards you with 5x your total bet; this is triggered when the 5 positions that form an X across reels 3, 4 and 5 are solely occupied by any combination of the X-Men Hero symbols: Xavier, Wolverine, Storm, Cyclops, and Nightcrawler.

Like all Official Marvel Slots, X-Men is linked to the Marvel Multi-Level Mystery Progressive Jackpot, which gives players the chance to win one of the four jackpots; the higher the bet, the greater the chance of entering the jackpot game. The Progressive Jackpots are triggered completely at random and the Power, Extra Power, Super Power and Absolute Power jackpots each offer their own enormous rewards.

I guarantee fans of the franchise won’t be disappointed with this Slot, as the features cleverly mimic the constant battle between Professor Xavier’s team of Mutant Heroes and Magneto’s brotherhood of Evil Mutants, making for an immersive Slot X-perience. 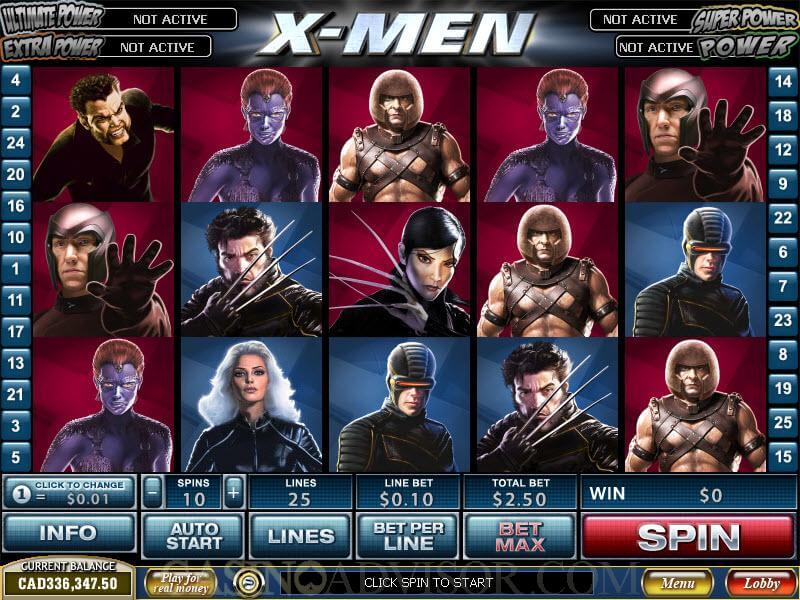