If you’ve watched enough zombie movies over the years, you will no doubt have picked up some handy tips about how to handle them. With this in mind, there’s one steadfast rule that everyone should know in the event of a zombie apocalypse: no matter what, don’t get bitten! That is certainly the primary goal of the main character in SkillonNet’s Zombie Bar online slots, too.

The young schoolboy accidentally wanders into the sewers beneath his town to discover a terrifying hoard of zombies enjoying a drink or two at a secret underground bar. Naturally, nobody believed him at first, but the Polaroid camera in his backpack certainly proved useful in convincing them otherwise.

This fascinating story is the premise behind these uniquely creative slots, which are one of the SkillonNet team’s most creative releases to date. From private undead cocktail bars filled with danger to plenty of other unexpected quirks, the title perfectly merges the terrifying concept of zombies with a more light-hearted overtone - not to mention big winning potential as well!

As the game begins, the titular zombies are nowhere to be found. The reels stand against an abandoned bar, with empty glasses and overturned chairs littering the scene. Pale green light creates an eerie atmosphere, which may just make you jump out of your skin when you spy one of the infected creatures lurking in the shadows. The brave young protagonist stands by the exit, waiting to beat a swift retreat should anything untoward appear, and his 3D rendering adds plenty of character to the overall atmosphere of this online slot. He also snaps a shot of the scene occasionally, hoping to catch one of the undead on film.

500x the Cash for Special Signs

Setting the tone for this scene is some gloomy music that could only be found at a Zombie Bar. There are 5 reels and 50 paylines in total on offer, which allows players to customize their stakes and gain some delicious cash wins in the process. The slots reels themselves are relatively plain, but the creepy symbols thereon hint at the fact that something terrible has happened up in the world of the living to create an army of brain-munching monsters in the drains below.

The symbols on offer include a selection of playing card icons spattered with blood, a radioactive warning sign, a biohazard icon, and a foreboding thunderbolt sign. Landing five of any of these symbols will instantly pay out 500x your triggering stake, while the Zombie Picture scatter will trigger the free spins round when just three or more appear in tandem.

This bonus, called the Zombie Zone, boasts an extra wild in the form of a camera symbol, which also acts as a multiplier of up to 10x your wins. You’ll start at level 1 with just 5 free games to enjoy, but can collect more zombie picture scatters to progress to the higher levels and evade even more of the undead to pad your bankroll. Be sure to watch your progress bar during this action packed feature, and remember: don’t get bitten.

With an imaginative story behind it, some terrifying visuals to marvel at, and plenty of chances to win big, Zombie Bar online slots are a great choice for those players who like their entertainment on the dark side. A total of 50 paylines ensure regular and rewarding wins, and your zombie-hunting skills will come out considerably sharper on the other side. It’s a win-win for all… especially when you play this slot at a top-rated Canadian online casino like Play Million! 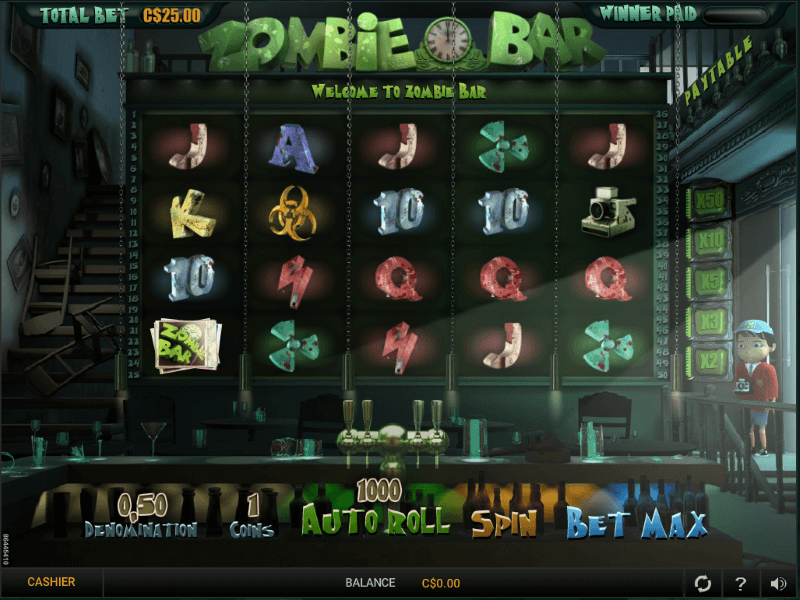