About the Mercy of the Gods™ Online Slot Game

Egyptian mythology-themed online slots games have always been popular with players, but few are as fantastic looking and appealing as NetEnt’s Mercy of the Gods™ progressive slot. This engaging game is a true visual feast, as it takes you on a virtual tour of an ancient pyramid where you’ll get to explore Free Spins, Re-spins, Double Wilds and of course, the impressive Jackpot bonus game. What’s more, Mercy of the Gods is playable across all devices, from PC and laptop, to smartphone and tablet, without any sacrificing of the great quality we’ve come to expect from NetEnt-powered online slots games. Let’s take a closer look at all that Mercy of the Gods has to offer.

Once Mercy of the Gods has loaded, you will notice that there are two Anubis-like figurines on either sides of the reels – they are standing guard in front of the ancient pyramid, which forms the backdrop to the reels. As for the actual symbols, these include the lower values, which are made up of standard playing card icons, like Ten, Jack, Queen, King and Ace. The higher value symbols include the scarabs, Tutankhamen, the falcons of Horus, and the lady explorer: she also happens to be the most valuable symbol – land five of her and you’ll score eighty times your stake. The Wild symbol can appear on any of the reels and it has the power to replace any other symbol, bar the Scatter and Bonus symbols, to complete winning symbol combinations. The Scatter symbol is represented by the Eye of Horus, while the Bonus symbol is a gold-coloured icon in the shape of a heart.

Played across five reels, three rows and twenty fixed paylines, Mercy of the Gods has some enticing special features. For example, there is the Gift of Life Re-spins feature – this is activated if one or more Wild symbols appear on a spin: the reels will then re-spin once the win has been paid out. If you land another Wild on a re-spin, you will enter the Gift of Double Wilds feature, whereby the activated Wild expands to cover the whole reel. If you should score three, four or five of the Scatter symbols on any of the reels, you will activate five, eight or twelve Free Spins respectively. Take note that the Free Spins cannot be retriggered. Best of all, there is the Gift of Wealth Bonus round, which is activated by three Bonus symbols occurring during a spin sequence, which can include re-spins. Once activated, all pay symbols are cleared, while all collected coins are added onto random positions on the reels and three free spins are given. All of the Bonus icons become sticky during this round. The mission of this round is to fill as many positions with Bonus symbols as possible. By doing so you could win one of three jackpots – the Minor, Major and of course, the big one: the Mega.

Play Mercy of the Gods at Casino Room

Mercy of the Gods is available to play at Casino Room – if you sign up, you will qualify for a C$100 Welcome Bonus, which you can play out on Mercy of the Gods. Have fun! 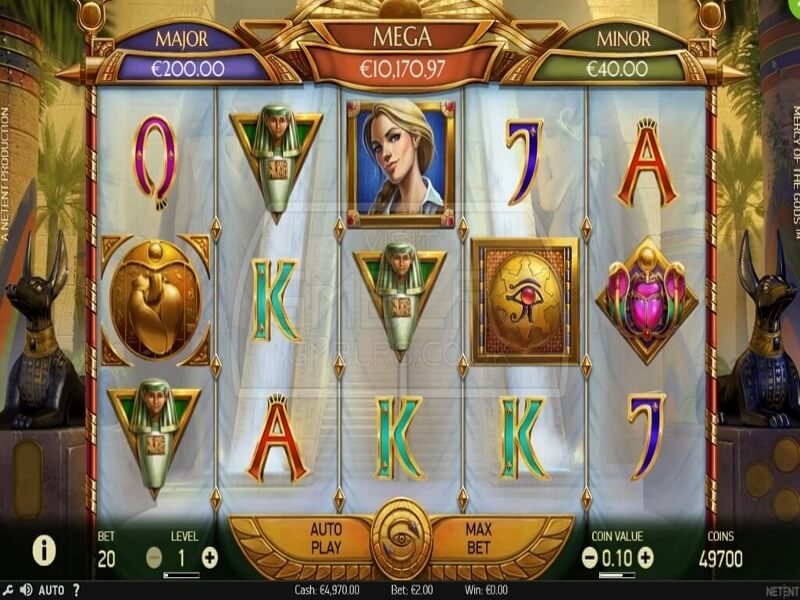