We’re going into some serious old school territory with the Halloweenies Scratchcard game and that’s because the original Microgaming powered online video slots game was released back in 2005, and it shows. I’ll be the first to say that many of the games that Microgaming have made have stood the test of time but regrettably Halloweenies has not. The game looks old and dated, in fact I’m surprised they’ve kept this one on the lot.

Everything about this game shouts archaic. Now that I’ve gotten that out of the way I’d also like to add that the original is still fun to play. Sure, it’s not great on the eye, but what always trumps that notion is that it can be great on the pocket. The concept is also quite absurd, thus making it fun and immersive. Of course as an online scratchcard game, Halloweenies has been quite simplified.

How the Game Works

The Halloweenies Scratchcard game is like most Microgaming powered online scratchcard games. It’s got a square divided into nine segments, three rows each and it’s taken each symbol from the original video slots game and placed them under these little blocks that you need to “scratch” to unveil. I say scratch lightly as you’re not really scratching them, you’re clicking them. Although, having said that, were you to play this one on your smartphone, then you would jiggle your fingers to unveil the results.

Click all nine squares and match three symbols – that’s it. There is nothing more, except to monitor the symbols on the side with their multiplier amounts so that you can know when it’s time to get excited, really excited and when it’s time to pop a cork.

The concept of Halloweenies is a truly bizarre one. You’ve got a bunch of creatures and monsters except they’ve decided to dress up and go trick or treating! You’ve got a werewolf wearing a fur coat, a witch in a bear suite and a ghoul dressed in a nurses uniform. It does give the game a bit of a comedic twist. However, theme and artwork aside, what you really want to be looking out for are the multiplier symbols of this online scratchcard game.

This might just be a straightforward online scratchcard game but like all good ones, it’s got some potent multiplier action, which is really what these games are all about. Halloweenies offers up six symbols each with a rising multiplier amount and it starts from as little as 1x and culminates with a 250x multiplier. All you need to do is match three like symbols in order to profit. The following symbols provide the following multiplier rewards:

Try it at JackpotCity Casino

I’ve spoken at length about JackpotCity, heck, I’ve practically written a novella about the place. Once again I stand before you all and I say that if you’d like to try out the Halloweenies Scratchcard game, then this is a good place to do it at. JackpotCity is not just an online and mobile casino, it’s a Canadian institution of entertainment. It’s one that’s been with us almost since the beginning of the whole internet casino movement and it’s still going strong. In recent times it’s partnered with another supplier, Evolution gaming to offer even more ways to win. I say, why not? 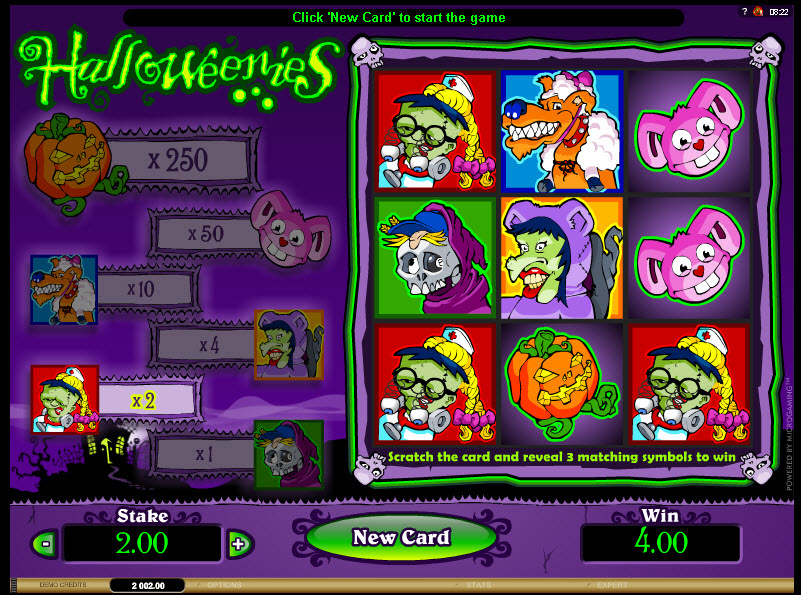