If you think that in today’s ultra politically correct and parliament based world, Kings have fallen out of grace, think again! Or rather, take a look at King Billy Casino, the online casino where nobility is taken very seriously and, most importantly, can be won without prior blue blooded credentials. It’s been some time since we had a captivating story from an online casino, and this one seems to have it right: King Billy is the benevolent ruler of Casinia and protector of the Kingdom. Players, who are called “Citizens” once they register, can climb up the royalty ladder by playing and having fun, becoming Barons, Dukes, Princes and finally Kings, sitting next to King Billy himself (female titles apply too). So, here we are to take a closer look at his Majesty’s Kingdom.

Navigation in King Billy Casino is intuitive and makes the general user feel at home from the first second. This is harder than it sounds, because good web navigation has as its purpose an uninterrupted experience, where things are expected to be found in the right place. Imagine for example that you are at a car show, see a vehicle you like, move towards it to open the door and find out there is no door handle! This is something many online casino designers fail to understand, but the King Billy designers’ team has gotten it spot on. Moreover, the graphics are stunning with the 3D character of King Billy, getting a Pixar score (actually, he looks just as good as some of NetEnt’s characters, which means he is REALLY good). Sections of games work really well too, easily understood. 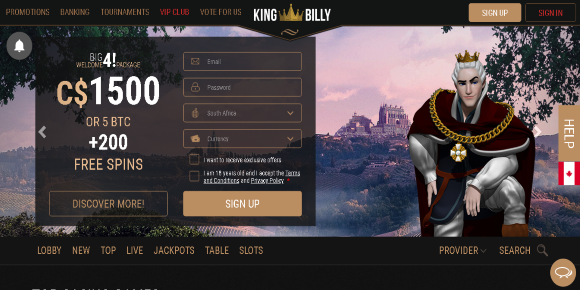 There is room for all players (pardon, Citizens!) in the Kingdom. With hundreds of slots and table games and new ones being added all the time, it should be rather hard to feel bored in his Majesty’s land (and in the unlikely case you were, the good people at King Billy are even running a blog to refresh your mind with catchy articles like “Casino bonuses are like love. You have to search hard until you find the perfect match”). Furthermore, we especially like the categorization of games into Classic, Movies, Music, Heroes and Men’s World.

One wishes that some countries could have the banking system of this online Kingdom. A fair number of currencies plus cryptocurrency are offered at King Billy Casino, making sure no-one is left out. VISA, MasterCard, Neosurf, iDebit, Instadebit, Interac, Ecopayz, Paysafecard, Money and MuchBetter *are there for you to deposit. Have in mind though, that the method you deposited is also the method for withdrawal. King Billy’s support team is the definition of friendly and also very cute when they are announcing offers to you “by decree of King Billy” or use their “thous” and “thees”. Nothing as good as a casino with a story its own people are the first to believe in it.

King Billy is an awarded Casino, as it got the respectable AskGamblers Best New Casino 2017 Award. Furthermore, good things happen when you become a Citizen in King Billy’s Kingdom. There is a satisfying 4 bonus Welcome Pack, fittingly called “Big 4”, for your 4 first deposits, with bonuses of 100%, 50%, 25% and 25% for a total of 200%, plus 200 Free Spins. There are several other promotions which make a player’s life interesting in King Billy, like “Extra Weekend” which lets the fun of the weekend continue into Monday. Moreover, there is a hefty Cashback for VIP Players of up to 13% on Thursday, and “Spin & Win” where you get your daily supplement of Free Spins. There are also Tournaments and tactical raffles with generous prizes for the winners. We left the best for last: once you move up the royalty ladder, apart from the immense satisfaction of it (oh, isn’t it just divine to be addressed as Baron John of House Doe!) the bonuses are getting better and better and really huge. It seems like King Billy rewards royalty when he sees it!