Rudolph’s Revenge must be one of the most creative online Christmas slots we’ve seen in a while. You can always trust Real Time Gaming to deliver high-quality reel spinning releases with innovative themes, and that’s just what they’ve done here.

In a refreshingly different take on holiday-themed storylines, this one sees Rudolph getting his revenge on all of those who never let him join in any reindeer games.

The 50 fixed paylines in Rudolph’s Revenge online Christmas slots are spread out over 5 reels and 3 rows. You can only stake 1 coin per line, at a value of CA$0.01 to CA$0.04. This puts the total betting range at CA$0.5 to CA$2.0 per spin, meaning everyone can afford to play.

The game is made even more accessible by the fact that the software is perfectly compatible with every desktop, tablet and smartphone. Whether they want to use an iOS, Android, Windows or other device, with these Christmas slots Canada based players are easily accommodated.

The basic theme of this game is that Rudolph has had enough of being treated like a second-rate reindeer. He wants to strike out on his own. While you’re helping him do that, he could return the favour and land you a top jackpot of 5000x your bet in the base game. There are other great prizes up for grabs, and with a theoretical RTP of 91% to 97% you stand a good chance of winning them.

However, as much as Rudolph is there for players, he is most certainly not there for anyone living in the North Pole. None of the other reindeer, the elves or even Santa escape the wrath of Rudolph’s Revenge, with the online Christmas slots icons including low-value card symbols that look like wrapped gifts as well as elves, Santa’s house and jolly old St Nick himself. He looks a little bruised, and the image of an elf frozen in an ice cube shows that the red-nosed reindeer plans to get rid of everyone

The Wild Symbol is Rudolph, naturally, with a vengeful glint in his eye. As well as replacing any regular icon, our reindeer friend applies a 2x multiplier to any win that he helps to complete. The regular gameplay and the Wild are exciting, but they are not nearly as thrilling as the free spins. This is where you see the kind of action in Christmas slots Canada really deserves.

The Scatter is a bomb disguised as a festively wrapped gift, and is rewarding enough to make you think Christmas has arrived. When at least 3 are seen anywhere on the reels at the same time, a retriggerable bonus round of 7 free spins is activated. When 4 or 5 presents are seen, the Scatter becomes an additional Wild Symbol during the free spins to level up your wins even more.

As well as everything else Rudolph’s Revenge has to offer, the online Christmas slots come with a progressive jackpot. This can be randomly awarded at any time, and the counter at the top of the screen shows you how big it currently is. With every spin of the reels, you stand a chance to win enough money to start your new year off in the best possible way! 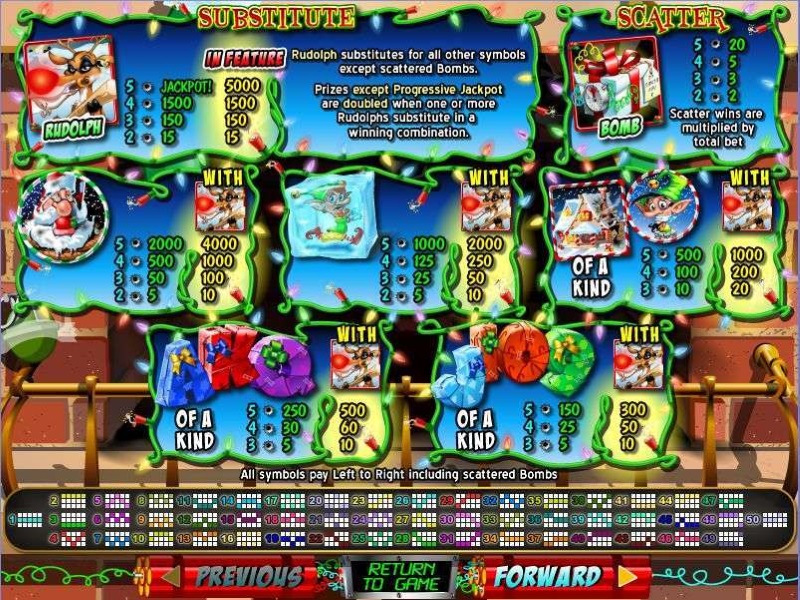